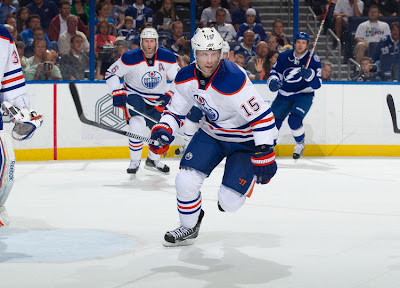 While Gilbert had been the Oilers best defenceman through the first three months of the season, he became expendable after youngster Jeff Petry. showed he was ready to take on a much larger role. Petry was forced  into playing major minutes after Gilbert was sidelined with an injury and after struggling at first, the sophomore proved to be ready for prime time. One would have thought that with Edmonton's defence being in the state that it is, that they would have looked to have kept Gilbert around to help build a rather weak defence, instead they decided to take the twenty-nine year old right out of the equation. As Oilers radio analyst Bob Stauffer has repeatedly said in recent weeks, Petry's improved play had almost made Tom Gilbert, "redundant" on Edmonton's blueline and I couldn't agree more.

Outside of Ladislav Smid, the Oilers did not have another rear guard that had the skill set to play in a shutdown role. Gilbert and Ryan Whitney had shown flashes of being able to help out when needed but neither were consistent or frankly good enough, when put into those situations on a full time basis...enter Nick Schultz. They needed to add a player with a different "dimension" to his game and the former second round selection has been exactly what they had hoped for.

In Schultz, the Oilers acquired a player that has little to no "flash" to his game but does all the little things necessary to be a successful NHL defencman. While he does not play an overly physical style of game, he has the ability to rub out opponents along the boards when needed, which was a trait that was always missing from Gilbert's game. Also, in his first nineteen games Schultz has managed to block forty shots which works out to just over one hundred and sixty over an eighty game schedule. That would rank him second on the team behind Smid, who has been among the league leaders all season long.

He is the type of defenceman that goes unnoticed most nights because he rarely, if ever, makes that glaring mistake and is almost never out of position in his own end. Basically, he is exactly the type of player this organization has been missing on their back end for years. While recent injuries to both Smid and Petry has forced Nick into a top pairing role, the plan moving forward for the former Minnesota Wild captain, looks to be in a number four/five role while being part of the Oilers top penalty killing unit and playing in a shutdown role against certain opponents. Add to that, the fact that he is held in high esteem by all his former teammates in Minnesota for being such a great leader and it appears as though the Oilers may have hit the jackpot.

The Edmonton Oilers have needed an upgrade to their blueline for some time now and after half-heartedly attempting to fix their issues with band aid type solutions, I fully expect this organization to go out and acquire a top pairing defenceman in the off season. They have young D men coming in the system and could possibly add another at this year's entry draft. Long term, they look to be set with not only quantity but quality on the backend but that doesn't help them in the here and now. The vastly improved play of both Ladislav Smid and Jeff Petry has made the need a little less dire for Edmonton to jump into something they may regret down the road and instead wait for something that makes sense and works for them. Just like they did on February 27th, when they decided to bring Nick Schultz into the fold.