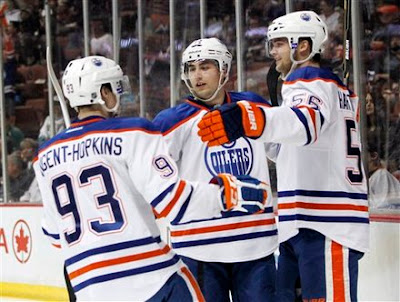 With the Ducks heading out on a three game road trip to end their season, the spotlight was clearly on, arguably the greatest Finnish player to have ever set foot on NHL ice. In an almost fitting manner, it would be the Oilers "Teemu", who idolized Selanne growing up, that would get things going.

It took the twenty-one year old fifteen seconds into his first shift with the duo of Jordan Eberle and Ryan Nugent-Hopkins, to make an impact. Edmonton took full advantage of a friendly bounce off the side boards and an absolute horrendous passing sequence, between the Ducks D pairing of Sheldon Brookbank and Luca Sbisa. After corralling the gift wrapped turnover, Eberle quickly found the streaking Hartikainen, who's flubbed wrist shot fooled Anaheim starter Jonas Hiller, to give Edmonton the early lead.

The assist gives Eberle seventy-five points on the season and still leaves him an outside shot of hitting the eighty point mark, with three games to go. If the second year winger can accomplish the feat, he will become the first Oiler player since Doug Weight, to reach the mark. The former Edmonton captain managed to put together a ninety point campaign back in 2000-2001, and no player wearing an Oiler jersey has come close since.

They would extend their lead two two, when Ryan Whitney's innocent looking point shot took a double deflection on rout to finding its way past Hiller. The Oiler blueliner's quick wrist shot, first hit Sbisa and then deflected off Hartikainen and went up and over the helpless Duck netminder. His second goal of the night, now gives the feisty Finn seven points since being recalled from Oklahoma City on March 16th. Much like his late season audition last year, Hartikainen has had an immediate impact in all facets of the game and is doing all he can to secure a regular spot with the Oilers in 212-2013.

Rookie Ryan Nugent-Hopkins picked up the secondary assist on the goal, putting him back into a tie with Colorado's Gabriel Landeskog, for top spot  among NHL rookies. With fifty-one points a piece, the pair hold a one point lead over the Devils Adam Henrique heading into the final week of the regular season.

From that point on, the Ducks started to carry the play and slowly started to work themselves back into the game. Not surprisingly, it would be the man of the hour who would get them on the board. Playing in career game number 1,338, the Finnish Flash picked up his twenty-sixth of the season, depositing a beautiful feed from Niklas Hagman to cut the lead in half. The goal gives Selanne sixty-five points on the season, which leads all Anaheim players. When you consider the Ducks have the reigning Hart Trophy winner in Corey Perry and players like Ryan Getzlaf and Bobby Ryan currently on their roster, it makes what the soon to be forty-two year old has accomplished, even more impressive.

That would be it on the scoring side, as Dubnyk was solid all night long in leading the Oilers to their fifth win in their last seven road games. While he was by far the busier of the two goalies, most of the Ducks shots were kept to the outside. Having said that, Devan made two outstanding stops, at crucial points, to secure Edmonton's one goal lead.

Just past the midway point of period two, Anaheim found themselves on a four-on-three power play courtesy of yet another goaltender interference penalty against Ryan Smyth. While shorthanded, Dubnyk made what Oilers radio colour analyst Bob Stauffer referred to as "the save of the year", off Saku Koivu. The veteran centre was left unmarked in front of the net and made a quick move that left the Oiler tender at his mercy but a wonderful second effort from the big man, allowed him to reach back and somehow get his stick on Koivu's attempt, at what appeared to be a sure goal. Not only was it a great stop but it was a timely one, as all the momentum was on the Ducks side.

Early in the third period, Edmonton found themselves down two men and again, their goaltender game up large. With Anaheim swarming the Oilers, Dubnyk made a brilliant point blank stop off Getzlaf, that left the Ducks star shaking his head. While the "circus stop" he made off Koivu looked nice, the stop off the big centre was absolutely outstanding.
Posted by Oil Drop at 8:15:00 am