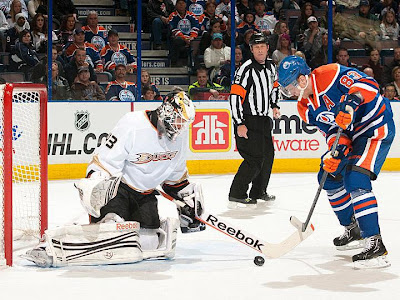 The Oilers came out flying and fired everything but the kitchen sink at former teammate Jeff Deslauriers but the big netminder stood his ground and kept this one scoreless, despite Anaheim being out shot 11-2 in the opening twenty minutes. Outside of the ex-Oiler, the Ducks were not ready to play but Edmonton did not make them pay and it would ultimately, come back to bite them.

Early in period number two, winger Darcy Hordichuk nailed Anaheim's Lubomir Visnovsky with a clean check that knocked the Ducks star defenceman out of action. Tough guy George Parros instantly came to the defence of his fall teammate but all he managed to do was take a two minute roughing minor, that Edmonton did nothing with. Shortly thereafter, the two heavyweights hit the ice one ore time and Hordichuk would have to answer the bell. While both men scored big with their fists with some crunching blows, Parros would eventually land on top of the Oilers tough guy, after both lost their footing.

Only minutes later, Sam Gagner would open the scoring with just his third goal in his last seventeen games. Edmonton's second line centre started the entire sequence off, by sending a high lopping clearance attempt out of the Oilers zone and down the ice. Winger Ryan Jones was able to track down the puck just inside the Ducks blueline and quickly spotted a hard charging Jeff Petry. While the talented blueliner's quick shot beat Deslauriers, it would catch iron and stay out. Unfortunately for Deslauriers, defenceman Francois Beauchemin's poor clearance went directly to Gagner, who promptly snapped his eighteenth of the year, past the down and out netminder.

Just under five minutes later, the visitors would even the score, when another former Oiler slipped an innocent looking shot through Devan Dubnyk. In what appeared to be a nothing play, Andrew Cogliano simply flipped the puck on net in hopes of getting a face-off in the Oilers zone but was instead rewarded with his second goal since registering a hat-trick on January 31st against the Phoenix Coyotes. The equalizer gives the former late first rounder, thirteen goals on the season and it was one of the weaker goals Dubnyk had allowed in some time.

Things would only get worse from there, as Bobby Ryan would put the visitors ahead with his twenty-ninth of the season just thirty-six seconds later. The line of Shawn Horcoff, Ryan Smyth and Eric Belanger lost their coverage assignments, as Whitney whiffed on the puck after the Oilers captain won the all important defensive zone face-off. While it was a tough break for the former Ducks defender, that is a play is has to make.

With time winding down, it looked as though Edmonton were headed for yet another regulation loss on home ice but that would not be the case, thanks to another huge goal from the team's leading scorer. After Ales Hemsky gained control of a loose puck just inside the Oilers line, the talented winger made a great play by sending the puck forward about five feet into open space, that a fast approaching Ryan Nugent-Hopkins would come from behind to corral the puck and send in Jordan Eberle on a partial breakaway.. While Eberle has struggled in recent weeks with his shootout attempts, he continued to show that he is money when given the shot at a breakaway during game action. The goal now gives the Oilers MVP thirty-four on the season, while the assist keeps Nugent-Hopkins in a tie for first among rookie scoring leaders, with Colorado's Gabriel Landeskog.

That would send this one into extra time, where the aforementioned blunders by Gagner and Whitney led directly to Ryan Getzlaf scoring just his eleventh on the season. To add a little more salt into the wound, all the Oilers players left the ice immediately following the winning goal and did not stick around to salute their fans for what has been another tough year in Oil Country. It has become common place for players to salute their fans after games throughout the NHL season but it has now become somewhat of a tradition, for players to at least salute their fans at the end of their final game...something obviously overlooked by the Oilers and their players. They most definitely need to pay much greater attention to those "little things" both on and off the ice.
Posted by Oil Drop at 6:30:00 pm