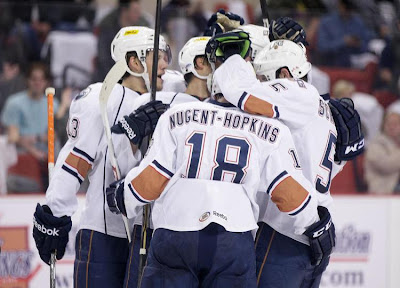 The highly regarded blueliner picked up three points on the night, including an assist on a gorgeous three way passing play that was finished by Teemu Hartikainen and engineered by one Ryan Nugent-Hopkins. The Nuge was buzzing all night long and set up fellow Oilers linemante Jordan Eberle, for his first of the year, after stealing the puck behind the Rampage net and finding his triggerman with a beautiful no look pass from his knees.

After looking rather ordinary in the Barons opening two games, Edmonton's dynamic duo came to life in outing number three. Eberle led all OKC players with seven shots on the night, while RNH was a threat every time he hit the ice. For the first time since pulling on an OKC jersey, the Oilers youngsters started to assert themselves and there was frankly nothing the Rampage could do to stop them.

Oklahoma didn't get off to the start they were hoping for, falling down 1-0 inside the opening five minutes but a brilliant pinch and nifty finish from defenceman Martin Marincin, put them back on level terms at the 10:41 mark. Schultz would give OKC their first lead of the night, beating Florida Panthers prospect Jacob Markstrom with a quick shot from the circle, with the Barons a man down.

Greg Rallo would even thing up early in period two, with his second of the season, but Hartikainen and Eberle would respond before the period was out. The Barons had a two goal cushion heading into the third and a rather sizable, 26-10, advantage on the shot clock.

It was status quo in the final twenty, until Schultz found an empty San Antonio net with twenty-eight seconds to play, for his second shortie of the night and third goal on the year. Three games in and the Barons blueliner not only leads the team in goals and points but he has been on the ice for eight of  the nine goals Oklahoma City have scored. More importantly, he has seemed to have found instant chemistry playing alongside Marincin on the back end. The duo have quickly become the go-to-pairing for head coach Todd Nelson.

After splitting their opening two games of the season in Lake Erie against the Monsters, the Barons will now return the favour, playing the role of host. With the Monsters in Oklahoma City tonight and again on Tuesday, October 23rd, one would think these next two games could get a little chippy.