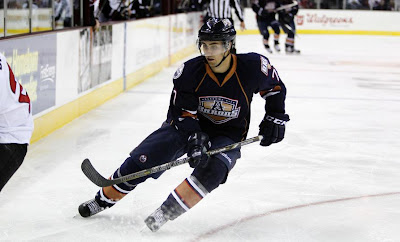 Perhaps I am wrong but last time I checked, the AHL is supposed to be a developmental league. While the current NHL work stoppage has put a bit of a different perspective on how an organization would "normally" look at using their players, it is still about development. Having said that, playing the likes of Eberle, Ryan Nugent-Hopkins and an almost healthy Taylor Hall, twenty plus minutes a night isn't the answer or necessary.

What should be mandatory, is putting these guys in situations that would allow them to further develop their games and become better all round players. In Eberle's case, that is getting him loads of ice time with on the penalty kill and as of right now, that doesn't appear to be in the cards.

The Oilers leading scorer has said on numerous occasions, that he was hoping to get a regular opportunity on the penalty kill and that clearly wasn't the case...at least off the bat. Coach Nelson is obviously in a bit of a tough spot but this decision should not be left up to him.

From an organizational stand point, there has to be some sort of man-date when it comes to the Oilers youngsters. Playing them to death at even strength or on the power play, outside of building chemistry with rookie defenceman Jeff Schultz, accomplishes little.Which in Nelson's defence, he seems to have little interest in doing.

The Barons bench boss has to look at things from a big picture point of view and he has no guarantee that these guys will be in OKC for the entire season...though that may change. As a coach, he can't lose site of using his "regulars" and continuing their development.

However, having Eberle on one of the Barons regular PK units and allowing RNH to take his fair share of defensive zone face-offs, should be a priority. While their first two games of the season were a bit if a struggle, they duo will get their their points. They will undoubtedly go through an adjustment period but will eventually rise to the top.

Does it do the Edmonton Oilers any good, to have their kids return to the Alberta Capital, among the leading scorers in the AHL but showing little, if any, improvement in areas that needed development? Easy answer...it doesn't.

At the end of the day, the NHL Lockout has put Todd Nelson and Oklahoma City Barons in a bit of a pickle. While they are not the only club in the AHL to have received an injection of young talent to their lineup, they are the one team that has added a ridiculous amount of talent...to what was already a very good team during the 2011-2012 campaign.

However, the name of the game remains development and at the moment, helping Jordan Eberle add another dimension to his game, needs to become the Edmonton Oilers number one priority.
Posted by Oil Drop at 11:49:00 am