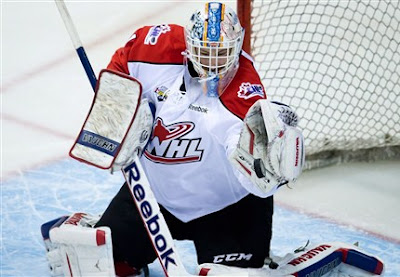 In what was arguably the finest game of the 2012 SUBWAY Super Series, it would be the two netminders who would steal the show in Vancouver. Edmonton Oil Kings Laurent Brossoit and Saskatoon Blades Andrey Makarov each pitched a shutout during sixty minutes of regulation, before the WHL All Stars pulled away in the shootout, giving the CHL a 3-2 lead over Team Russia, heading into Thursday night's series finale in Victoria.

In a game that featured not a single goal in regulation time, it sure did not lack in entertainment value or intensity. The very best of the Western Hockey League came out with a burr under their saddles, as they looked to punish a weary Russian side as often as possible during the opening twenty minutes of play. Setting the tone from the moment he hit the ice, was Oil Kings forward Travis Ewanyk, who delivered three bone crunching hits in period one.

While Brossoit looked shaky in the early going, Makarov was at the complete opposite end of the spectrum. The shot clock may have read 13-11 WHL after twenty minutes of play but the home side were the far better team during the opening stanza. The Russian puck stopper stood tall in making a number of big stops, with the two late saves off Mitch Holmberg being the best of the bunch.

However, it was a complete 180 in period two, as the Russians held a slight 12-10 advantage in shots on goal but this time it was the Oil Kings tender who kept his side in it. The big netminder stopped everything fired his way, including Evgeni Mozer on a clear-cut breakaway, as the visitors were buzzing in the opening ten minutes of the second period. As one Edmonton Oil King started to take over the game, another saw his night come to a rather abrupt end.

After pounding everything that moved in a red jersey during the opening stanza, Ewanyk's night would come to an end in the opening shift of the middle stanza. Russian blueliner Mikhail Naumenkov nailed the feisty Edmonton winger with a submarine style hit along the boards, which sent the Edmonton Oilers prospect to the ice in a heap. Not a dirty hit by any stretch but one that would bring the spark-plug's night to an unexpected conclusion.

The tide would turn once more in the third, as the WHL All Stars came in waves but were still unable to get one behind Makarov. By the final buzzer, the Russian starter had turned aside all thirty-five shots sent his way, while Brossoit had stopped all thirty in his direction. Both were unbelievable on the night but there had to be a winner...and a loser.

In the six game Super Series format, any game that is tied at the end of three periods of play, automatically goes to 5-v-5 shootout. With the level these two were playing at, it seemed as though it could be a rather lengthy battle but in reality, it was pretty much over before it ever really got started.

Markov continued his dominance over Holmberg, stopping his opening attempt but Brossoit was more than up to the challenge, as he easily turned away Nail Yakupov to keep it scoreless. To be fair, the Edmonton Oilers latest first overall selection's shootout attempt was downright horrific and seemed to set the tone for what is ultimately nothing more than a glorified skills competition.

The WHL would score on their next three shots, as Hunter Shinkaruk, Mark McNeill and Sam Reinhart suddenly made the Russian puck stopper look as though he was out of his league. In between the sudden flurry of goals at one end of the ice, Brossoit stoned both Vladimir Tkachev and Andrei Sigarev to earn his side a hard fought but well deserved 1-0 shootout victory.

With the win the Canadian Hockey League stars now hold a one game advantage going into Thursday night's finale in Victoria. In what has been a rather grueling six game in eleven night trek for Team Russia, the visitors have to find away to win Game Six, in order to force a winner-take-all shootout at the conclusion of tomorrow night's game.

It may not have turned out to be the offensive explosion many had hoped for but the 2012 SUBWAY Super Series will come down to the wire and as a fan of the game, who could really ask for anything more.
Posted by Oil Drop at 3:07:00 am