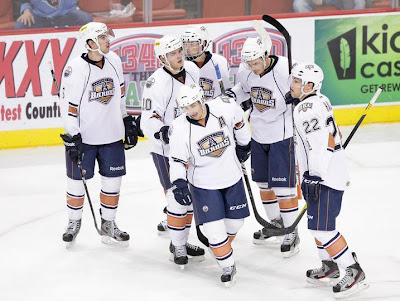 In what was a tale of three hockey games, the Toronto Marlies won a wild shootout Tuesday afternoon in Oklahoma City, edging the Barons 6-5 in an overtime thriller. Maple Leafs defenceman Jake Gardiner scored the OT winner for the visiting Marlies, wasting a furious third period OKC comeback, which was lead by the Edmonton Oilers dynamic quartet.

Jordan Eberle led the charge up front with four assists and Ryan Nugent-Hopkins chipped in with a three point afternoon, including two late third period markers. Taylor Hall scored his third goal in five games, on his way to a two point afternoon, and defenceman Justin Schultz picked up to more helpers, stretching his league leading point total to eighteen on the season.

After digging themselves a massive hole after twenty minutes of play, trailing 4-0 and leading to a well deserved early exit for starting netminder Olivier Roy, Oklahoma started the long climb back. Hall would break the goose egg  with a late second period power play marker, on a lovely setup from Nugent-Hopkins. They would cut the late in half, early in period three, as Marco Arcobello jumped on a loose puck and fired home his fourth of the season behind Marlies starter Jussi Rynnas.

Toronto wasted little time restoring their three goal cushion, as Mike Zigomanis re-directed Mike Kosta's point shot past Yann Danis, for their first power play goal of the afternoon. With the score 5-2 and just under thirteen minutes to play, it appeared as though Toronto had this one well in hand. Unfortunately for the Marlies, someone forgot to little the Barons in on that bet of info, as a few late opportunities on the man advantage brought the Edmonton Oilers youngsters to life.

With Oklahoma on a two-man advantage and the first penalty just coming to an end, Nugent-Hopkins would slide home his first on the night off a scramble in front, making it a two goal game, with 3:16 to play. A minute and a half later, the lead was suddenly down to one, as Teemu Hartikainen deflected home Eberle's blast, to make it a 5-4 game, with just over two minutes remaining.

OKC would complete the comeback with twenty-two seconds left on the clock, as the Nuge would bang in his second goal in under three minutes, after some hard work in front from Hall and Eberle kept the play alive. Just like that, the Barons high-end talent erased a three goal deficit in a blink of an eye and somehow, this one was headed to overtime.

Midway through the extra session, Oklahoma defenceman Alex Plante was assessed a hooking minor that Oklahoma manged to kill off but just seconds after Plante returned to the ice, Gardiner unleashed an absolute bomb to win it for the Marlies.