CHL Super Series: Russia too much for Team WHL 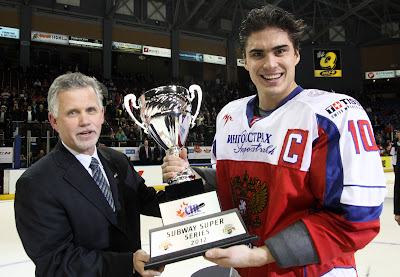 With the 2012 CHL Subway Series on the line and playing their sixth game in eleven nights, Team Russia elevated their game but the WHL All Stars could not do the same. Defenceman Mikhail Naumenkov led the Russian attack with a three point night, on the way to an easy 5-2 victory and winning only their second Super Series Championship in ten tries.

After both netminders were dominant in the WHL's 1-0 shootout victory in Game Five, the two were back in between the pipes on Thursday night. While the Edmonton Oil Kings Laurent Brossoit out dueled Andrey Makarov in what was a fairly even matchup, on this night, it would be a different story. Team Russia were the far better side in chasing Brossoit from the cage after thirty minutes of play.

With both sides a little tentative in the opening minutes of play, it would be the visitors who would open the scoring. Naumenkov's point shot found it's way behind a screened Brossoit and the Russians had the lead they desperately wanted but their was still a ton of hockey to be played.

The backbreaker came in the dying seconds of the opening frame, as Andrei Sigarev was allowed to skate in all alone and pick the top shelf, making it 2-0. An absolutely awful line change, a weak backcheck from Mark McNeill and some dreadful defending from both Derrick Pouliot and Morgan Rielly,  turned a 1-on-3 rush into Sigarev having what was essentially, a shootout opportunity.

Ty Rattie would cut the lead in half, as his weak backhand found its way through Makarov, eight minutes into period two. The goal seemed to energize the crowd in the Save-on-Foods Memorial Centre but unfortunately for the WHL, the Russians would restore their two goal lead...all of thirty seconds later.

Kirill Kapustin's initial shot on goal was stopped by Brossoit but Kirill Dyakov was allowed to scoop up the rebound and deposit it into a wide open net. Just like that, the energy in the building was gone and seconds later, the Oil Kings netminder would have his night come to a premature end.

While he did allow three goals on just thirteen shots, Brossoit had little help from his teammates. With his club down 3-1 and in need of a spark, head coach Don Nachbaur decided to make the swap. The plan coming in, was to have Eric Comrie start the final game of the series but Nachbaur decided to go back to the hot hand in the finale.

Regrettably, the move changed little, as Alexander Khokhlachev made it 4-1, less than five minutes after the goaltending change. Just as they had done with Brossoit, the Western Hockey League stars left their goalie to fend for himself. Comrie was very solid the rest of the way but in the end, it mattered little.

Adam Lowry tried to get the home side back into it with an early power play marker but this one was never really in doubt. Yaroslav Kosov would seal the deal with his first of the tournament, into an empty net, to close out the scoring.

In what has to have been a grueling eleven day trek across Canada, at the end of the day, watching Captain Nail Yakupov hoist the championship trophy has to have made it well worth it.
Posted by Oil Drop at 10:37:00 am