Oilers trio were pure magic on Hockey Night in Canada 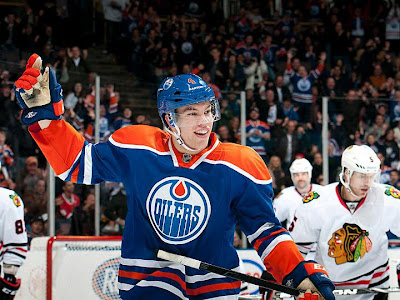 At the moment, it seems so very long ago but back on November 19, 2011 the Edmonton Oilers trio of Jordan Eberle, Taylor Hall and Ryan Nugent-Hopkins had a coming out party of sorts. During the late game of CBC's Hockey Night In Canada , the trio of youngsters torched Jonathan Toews and his Chicago Blackhawks teammates by the score of 9-2, sending a ripple of excitement across not only the Alberta Capital but with hockey fans across the country. Funny how things can change in one calendar year.

After having their lunch handed to them, on more than one occasion by the Hawks over the previous number of years, it was Edmonton's turn to send a message...one that Chicago heard loud and clear. It was a game that saw a struggling Ales Hemsky score his first of the year at the forty-eight second mark to set the tone on what would be a special night at Rexall Place.

Having already wowed fans across the country with dominant performances against the Vancouver Canucks and New York Rangers in earlier Oilers telecasts on Hockey Night in Canada, Nugent-Hopkins took it to another level. The youngster topped his hat-trick night against the Canucks, with a staggering five point performance. It had fans across our great nation thinking back to a time when another skinny kid that wore those same colours and a number in the "90's" ruled the National Hockey League.

Jordan Eberle "chipped in" with a goal and four helpers and what had been a rather slow start to Taylor Hall's sophomore season, instantly became an after thought. Hall ripped the Blackhawks apart for his second career hat-trick and just like that, fans had visions of perhaps seeing another great team unfolding before their very eyes...just as they did thirty odd years ago.

Fast forward one calendar year and look where we are now. Instead of talking about the great young players in Edmonton and other locals across the league, we are stuck with yet another Saturday night and no Hockey Night In Canada. What a waste.

Is it really worth missing out on this sort of magic? I am talking to you Gary Bettman and you Donald Fehr. If you won't bring it back, perhaps your "followers" will come to their senses and force you both into making a deal. Have hockey fans not suffered long enough? End this nonsense and bring back the game that we all love. Saturday night's just don't seem the same.