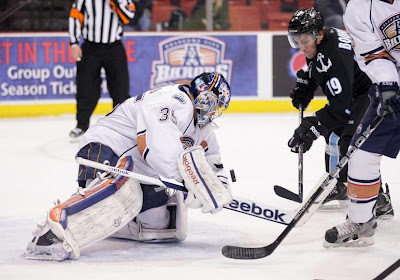 Defenceman Taylor Fedun notched his first goal as a pro and Mark Arcobello scored the overtime winner, as the Oklahoma City Barons edged the Milwaukee Admirals 2-1 in Friday night AHL action. Yann Danis was sensational in making forty-three stops and rookie Justin Schultz picked up two more points, giving him twenty for the season, as he continues to lead the American Hockey League in scoring.

In what was a penalty filled affair, that featured three fights and a late third period boarding major to defenceman Alex Plante, the Barons leaned heavily on the resurgent play of their veteran netminder. After somewhat struggling to start the year, Danis appears to have finally relocated his game.

While the Admirals did open the scoring early in the second period on Austin Watson's fourth of the season, it would be a seeing-eye point shot from Fedun, which found its way behind starter Jeremy Smith, that was the story of period two.

After breaking his right leg in scary incident during an exhibition game between the Edmonton Oilers and Minnesota Wild, the talented blueliner was forced to miss the entire 2011-2012 campaign. Fedun poured everything he had into rehabbing his broken femur, in hopes of being ready for the 2012-2013 season and his hard work paid off.

He has looked solid in his return to the ice and was rewarded with his first goal as a pro on Friday night. From the Barons standpoint, it was win-win situation. Not only were they thrilled to see Fedun score his first but it also got them back on level terms.

After accomplishing little during three second period power plays, it was while the two sides were playing four-on-four, that Oklahoma finally managed to break through. It was a huge goal and one that gave OKC hope heading into period three.

Unfortunately, it was Milwaukee who would carry the play in the third, outshooting the Barons 17-6, but they were unable beat Danis. This despite being handed a five minute power play, with just over four minutes left in regulation, thanks to Plante's needless boarding major. It has been a tough start to the season for the former first round pick and it only got worse on Friday night.

Lucky for Plante, his teammates were not only able to kill off his major penalty but also scored the winner in the extra session. Defenceman Martin Marincin found a wide open Arcobello with a gorgeous slap pass, that the diminutive centre easily deposited behind a helpless Smith.

Outside of Schultz picking up two more helpers on the night, the Edmonton Oilers big three were quiet on the night, as Jordan Eberle, Taylor Hall and Ryan Nugent-Hopkins were all held off the scoresheet.

The two sides will not have to wait long to renew acquaintances, as they are set to face-off one more time on Saturday night, in their weekend doubleheader at the Cox Convention Center.
Posted by Oil Drop at 7:36:00 am