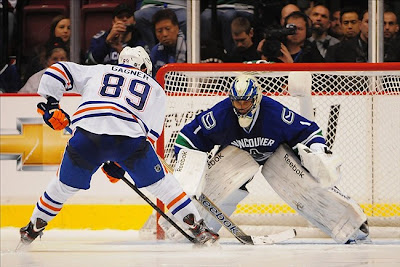 The latest rumour surrounds a possible one-for-one swap, of Oilers centre Sam Gagner for the Vancouver Canucks star netminder. Can you say no chance?

There is little doubt Mike Gillis would want a player with Gagner's skill set in return for a goalie as good as Luongo but that simply won't  happen. Though the veteran puckstopper remains one of the premier netminders in the Western Conference, his ridiculous contract (which runs until the end of the 2021 season), will keep the Canucks GM from getting the return he is apparently holding out for.

There are those out there that feel Luongo's $5.3 million cap hit is some sort of deal. However, the fact he will earn $6.7 million in each of the next six seasons, makes that iffy at best. To expect the thirty-three year old to remain among the best goalies in the league, as he nears his fortieth birthday, would be foolish on any organizations part.

Having said that, do you really think Gillis would want to face Luongo on a regular basis over the next two or three years? Who knows, maybe he would but the smart money would be on him wanting to move Roberto as far away from the West Coast as possible...let alone a division rival.

The Canucks hands are tied and they know it. The can either give away their former franchise player for next to nothing and be happy that they were able to rid themselves of his salary or take an equally bad contract in return and hope to add a piece or two with him. The only other "option", would be buying him out in the off-season and frankly, that isn't an option.

If my math is correct, they would owe the former fourth overall pick of the New York Islanders $27 million dollars. From an owners standpoint, how would that make any sense? Maybe things are different in Vancouver but some how I doubt it. Why would the Aquilini Group give away millions of dollars with absolutely no return? That's right, they would not.

From the Oilers standpoint, adding a goaltender of Luongo's abilities would obviously make them a better team in the here and now but long term, it makes no sense.

Gagner aside, this team can not have a near thirty-four year old netminder on their roster, for the next decade. Last time I checked, Taylor Hall and Jordan Eberle both start earning $6 million a season in 2013-2014, with the likes of Ryan Nugent-Hopkins, Justin Schultz and Nail Yakupov to be signed in the coming years. Why exactly would Steve Tambellini consider this sort of move? That's right, he would not.

Bringing us to the final and most obvious reason why Luongo would never find his way into an Oilers uniform...his no-trade clause. Is it lost on the masses that Roberto asked to be moved to Florida? At this stage of his career, he and his family are not going to pick up and move to the Alberta capital.  Come on people, give your head a shake.

As much as the Mike Gillis and the Vancouver Canucks would love to deal Roberto Luongo and remove the circus that will undoubtedly surround this club until the veteran netminder is finally moved, it is a problem they created and allowed to get to this point.

Unfortunately for them, having rumours swirling around the possibility of him landing in Edmonton, won't see him leave town any sooner.
Posted by Oil Drop at 11:04:00 am