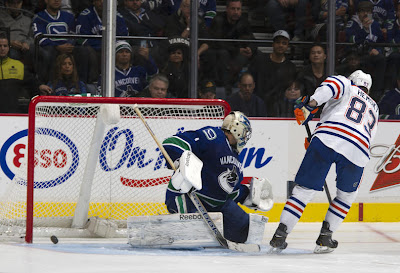 Jordan Eberle picked up right where he left off in 2012, roofing his first of the season on a brilliant backhand late in period two. While Ales Hemsky forced the game to overtime with a third period power play marker and than clinched the victory with a nifty little shootout finish.

Defenceman Alex Edler opened the scoring midway through period one, on a shot the Oilers netminder would love to have back, giving the Canucks the early advantage. To Dubnyk's credit, from that point on, the Oilers starter was rock solid, giving his team a shot at taking home the two points.

Despite falling behind 2-0 on Zack Kassian's first of the year, thanks to some awful defensive zone coverage from Ryan Whitney and Sam Gagner,  Edmonton was the team dictating the pace for much of the middle frame. If not for the stellar play of Luongo and the Oilers inability to hit the net on numerous quality chances, the visitors could have easily found themselves up a goal or two.

Fortunately for them, Eberle's timely finish, gave his squad the shot of energy and momentum, to get back on level terms in the third and force the game to overtime.