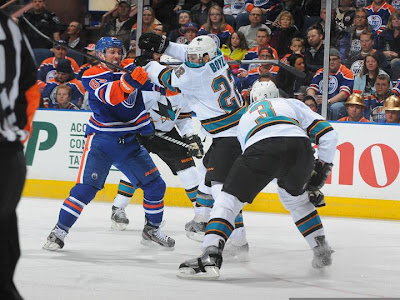 Rookies Nail Yakupov and defenceman Justin Schultz both scored their first NHL goals in the loss, in what was really the only positive to take away from a disastrous return to Rexall Place ice. Taylor Hall notched his first of the season early in the third, as the Oilers alternate captain snapped home the fiftieth goal of his young career.

Netminder Devan Dubnyk had a night, or at least period, to forget, allowing all six goals on eighteen first period shots, before giving way to Yann Danis to start period two. In his defence, while the Oilers tender did struggle from the outset, he had next to no help from his teammates, who simply forgot to show up for the opening twenty minutes of play.

Early penalties to Ales Hemsky and Jeff Petry put the Oilers behind the eight-ball off the hop, as goals from Dan Boyle and Logan Couture put the visitors up a pair before the game was five minutes old. Despite being badly outplayed in the opening eight minutes, Edmonton got themselves right back in it, when Yakupov buried his first on the power play.

Unfortunately, the club's defensive zone coverage went out the window over the final ten minutes and the Sharks struck often and quickly. A pair of goals from Patrick Marleau at the 10:02 and 11:07 marks, made it a three goal cushion and silenced what had been a super charged crowd, heading into the home opener.

San Jose would add two more nails to the coffin, before the period was out, as Couture put away his second of the frame and Marc-Edouard Vlasic hammered home his first of the year, with forty seconds to go, and matched the Oilers worst period of hockey in club history. The last time Edmonton allowed six in period, was against the Boston Bruins...just over thirty-three years ago.

After going a perfect five-for-five on the penalty kill against the Canucks on Sunday night, the PK took a step backward against the Sharks, allowing three goals against on five chances.

To the Oilers credit, they picked themselves up off the mat and played their tails off over the final forty minutes but it mattered little. Granted, the Sharks had clearly put it into neutral over the final two periods but Edmonton did turn it around on both the scoreboard and shot clock.

Lucky for them, with the NHL schedule being as compact as it is during this abbreviated forty-eight game season, they do not have to wait long before getting back at it. They will lick their wounds and try and right the ship, before playing host to the defending Stanley Cup Champions on Thursday evening, as the 0-2 Los Angeles Kings by a visit to the Alberta capital.
Posted by Oil Drop at 7:01:00 am