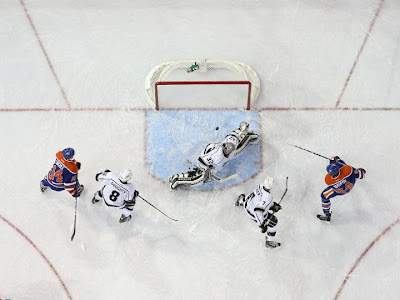 Sam Gagner's power play winner proved to be the difference, leading Edmonton to a heart-stopping 2-1 victory over the visiting Los Angeles Kings. It was a perfect finish, to what was an absolutely wild night at Rexall Place on Thursday night.

Both teams saw ample time with the man advantage but neither side could convert...until Gagner's OT winner. Unfortunately for Tom Kowal and Greg Kimmerly, it was a game in which the two played far to big a role...for everyone's liking.

From the Oilers standpoint, they not only had a Ryan Nugent-Hopkins apparent game tying goal incorrectly waived off but also had the rarely, if ever, called "instigator - with a visor" penalty assessed to defenceman Ladislav Smid and a delay of game penalty for a "face-off" violation, with Edmonton on the power play. It was game that had absolutely no flow to it but one that will ultimately help bring this team together.

For all their frustration with many of the decisions made from the on ice officials, Ralph Krueger's crew had more than their fair share of breaks. While netminder Devan Dubnyk rebounded nicely from a disastrous opening twenty minutes in the Oilers home opener, he could thank his goal posts for repeatedly bailing him out.

While at the other end of the rink, Kings netminder Jonathan Quick looked every bit like the Conn Smythe Trophy winner he was during last year's playoffs. As good as Quick was, like Dubnyk, he had a little bit of help on the night but his came courtesy of some shotty officiating.

After a quick whistle cost Yakupov a goal early on, it was the aforementioned Nugent-Hopkins non-goal, that left many in the arena shaking their heads. As exasperated as everyone in the building was, the following sequence was something that has undoubtedly connected this young group to their fans.

Outside of Ales Hemsky, Shawn Horcoff and Ryan Smyth, none of these players have heard Rexall Place as loud as it was after Yakupov's equalizer and Gagner's winner. It was playoff-like "noise level" in Edmonton...something both the fans and players hope will once again, become a regular occurrence in Oil Country.

Oil Notes: Defenceman Mark Fistric made his Oilers debut on Thursday night, playing just over fourteen minutes and delivering the physicality this organization was hoping the bruising rearguard would bring to the table. Considering Fistric had not played in over nine months and was dropped into a game that had as many penalties in it as this one, the former Dallas Stars blueliner was rock solid.

As far as rookie Justin Schultz goes, for those who were thinking the youngster would be slowly worked into the Oilers top four, think again. Three games into his NHL career and the kid has already become Edmonton's go to guy on the backend.

The youngster not only led all Oilers skaters in total ice time, with 26:51, but also saw more ice than any player at even strength. Schultz picked up assists on both goals, giving him three points in three games, while averaging 23:48 of ice a night.