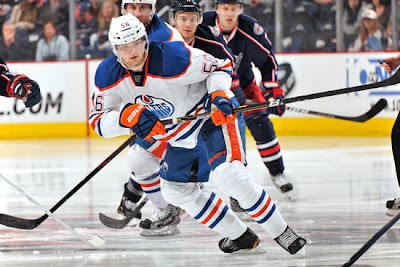 Though he did not have a "starring role" on the Oklahoma City Barons league leading power play, Hartikainen was the one doing much of the dirty work and leaving the glory for the likes of Jordan Eberle, Taylor Hall, Ryan Nugent-Hopkins and Justin Schultz. His puck retrieval abilities have been outstanding the power play and his net presence played a major role in the Barons success on the man advantage.

While the twenty-two year old split time with Shawn Horcoff on the club's top power play unit throughout an abbreviated training camp, it appears as though the Oilers captain will be saddled with only his regular defensive responsibilities to start the season. Tough to say where this ends up going as the year progresses but I have always been the guy begging the coaching staff to keep Horcoff's minutes under control and actually give him a shot at being successful.

Under the category of head scratchers, all signs are pointing towards head coach Ralph Krueger going with Corey Potter as the sixth defenceman on Sunday night in Vancouver, instead of recently acquired and former Vancouver Giants captain, Mark Fistric. While there does appear to be a desperate need for Fistric's physicality along the blueline, the fact he would also slide into one of the Oilers penalty killing tandems seems to make him the obvious choice.

Remember, Potter's main contribution in 2011-2012 came on the man advantage, which he will see absolutely no time on, barring injury. Perhaps it's just a smokescreen from the Oilers new bench boss or maybe they would like to give Fistric a little more time to learn the system before putting him in. Safe to say, if the bruising rearguard is not in the lineup in Tuesday night's home opener against the San Jose Sharks, coach Krueger and his staff will have some explaining to do.

Much of the hype out East seems to be surrounding the New York Rangers but the Boston Bruins look to be the cream of the crop...at least during the regular season.

Not much love for the Canadian teams here but Ottawa has as a good a chance as anyone to grab one of those final two playoff spots. The only other team I see with a shot at getting in, would be Florida. They have a great young core but I am not sold on the Theodore/Clemmensen duo repeating their performance from a year ago. Now should they acquire Roberto Luongo at a reasonable rate or have prospect Jacob Markstrom claim the cage during the first half of the year, the Panthers could very well defend their Southeast Division crown.

Everyone has jumped aboard the St. Louis Blues train and it is easy to see why. Much like the Bruins out East, they look as though they are the best of the bunch but come playoff time, I am not so sure.

This will be the year the Oilers sneak back into the playoffs and should they meet the Blues in a seven game series, dare I say, they would have a decent shot at pulling off the upset. The Wild are much improved but even with the addition of Ryan Suter to their backend, their blueline is not good enough. Unlike the vast majority, I feel the Kings will struggle to get back to the playoffs but come crunch time, don't be surprised to see them turn it up two or three notches. Chicago will rebound from an awful season a year ago and push St. Louis to the very end, for the Central Division title.
Posted by Oil Drop at 11:45:00 am