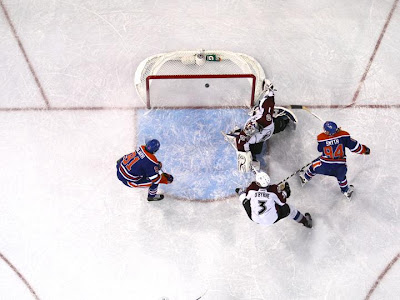 Now that's more like it. While it may not have been how head coach Ralph Krueger drew it up on the whiteboard, the Edmonton Oilers 6-4 victory over the visiting Colorado Avalanche, is the type of hockey that fans across the league expect to see from this group of talented youngsters.

A three point night from Taylor Hall and pair of goals from Ales Hemsky and Jordan Eberle, paced the Oilers to what was almost a must-win situation for Ralph Krueger's crew.

Magnus Paajarvi scored his second game winner in the last seven days, sliding home Ryan Smyth's goal mouth feed past an exhausted Semyon Varlamov, earning Edmonton the come from behind win in the back half of Hockey Night in Canada's Saturday night double-header.

After falling behind 3-1 in the opening period of play, despite badly out shooting the Avalanche to the tune of 23-12, the Oilers were in dire need of a spark and that came in the form of a goaltender swap and one Nikolai Khabibulin..As good as starting netminder Devan Dubnyk has been through the first few weeks of the season, this was a night in which #40 was not on the top of his game.

Very much like the season opener against the San Jose Sharks, Dubnyk looked shaky from the drop of the puck and allowed two iffy goals to sneak past him during the first period. To Krueger's credit, he made the right call and pulled his go-to-guy in favour of his veteran tender, in hopes of creating a rallying point for his troops.

Be it for the guy who just got yanked and has saved their behind for much of the season or for their veteran back-up who had not won a game since February 11th, 2012, against the Ottawa Senators on HNIC. Either would have been fine with the Oilers new bench boss, as long as it could help jump start his group.

They came out hard to start period two but the Avs would add another on the man advantage, making it a three goal cushion. With this one seemingly all but over, Khabibulin came up with an enormous stop off John Mitchell, keeping it a three goal difference. While it didn't seem like a big deal at time, that all changed in a matter of minutes. As a hundred and eighty seconds later, Edmonton found themselves within a single shot of getting back on level terms, thanks in large part to the netminder.

Not long after watching Khabibulin do his thing, the Oilers top line simply took over. The trio managed to pin the Avs in their zone and cycle the puck for what seemed to be an eternity, leading directly to a perfect pass from Hall and a deadly finish from Ryan Nugent-Hopkins. The goal was the first of the season for the Nuge and seemed to not only bring the team back to life but also re-energizing Rexall Place.

Fifty-nine seconds later, that lead would be trimmed to one and Rexall would explode one more time.

A hard forcheck from Smyth produced a turnover inside the Avalanche zone and after corralling the loose puck, #94 wisely shoveled over a pass to a streaking Ales Hemsky and the talented Czech maestro did the rest. Hemsky not only undressed Shane O'Brien but also corkscrewed Varlamov into the ice with an absolutely ridiculous move, before depositing the puck into a yawning Colorado cage.

The goal was not only the veteran wingers second of the night and seventh of the year but more importantly showed the rest of Canada just how good a happy and healthy Ales Hemsky can be. He may not be everyone's cup of tea but you would be hard pressed to find many players as skilled as the Oilers #83.

With what surely most have felt like a huge uphill battle on minutes earlier, Edmonton came out like gangbusters to start the third, firing shot after shot at the beleaguered Avalanche puck stopper. As the onslaught continued, it appeared to be just a matter of time before the Oilers would find their equalizer, which came at the 8:58 mark...from Mr. Clutch himself, Jordan Eberle.

Despite having gone nine long games without scoring and clearly gripping his stick over the last week or so, the former thirty-four goal man, neatly took a Sam Gagner feed off his skate, to his stick in a blink of an eye, before banging home his fourth of the season and completing the comeback.

With Rexall Place jumping and just over half a period to go, Edmonton had all the momentum and poised to take their first lead of the night but once again would needed their forty year old netminder to come up large at crunch time.

After going much of the final frame with next to no action, Khabby was called upon to make not one, nor two but three consecutive circus stops from in tight, single-handedly keeping his team on terms. level terms.

It was mesmerizing stuff. For a fan-base that have always had a love/hate relationship with the seventeen year NHL vet, on this night, all was forgiven.

Paajarvi would bang home the eventual winner with 1:34 left to play, thanks to a perfect give-and-go between Smyth and Eric Belanger, handing the talented Swede his second game winner of the week. This despite being initially scratched from the starting lineup.

Eberle would slide home his second of night, into an empty net, to close out the scoring and give the Oilers a franchise record fifty-six shots on goal. For a team that had been as inconsistent at creating even strength scoring chances as this one, this offensive blitz could be just what the doctor ordered.

At the end of the night, the shot clock read 56-29 Edmonton but it was the manner in which they pulled off this comeback that was so impressive and one that could ultimately, be the turning point in their season.
Posted by Oil Drop at 3:38:00 am