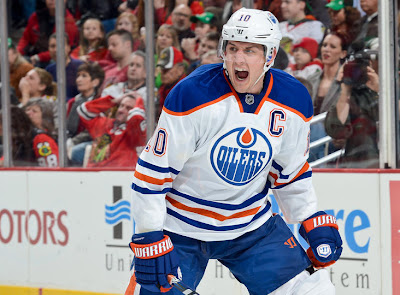 The day after calling a  players only meeting with his struggling teammates, Edmonton Oilers captain Shawn Horcoff made his long awaited return to lineup on Sunday night in Chicago. Apparently those words did not fall on deaf ears, as the Oilers pulled out a thrilling 6-5 victory over the first place Blackhawks.

A pair of goals from Sam Gagner and multiple point efforts from Taylor Hall, Ryan Nugent-Hopkins, Justin Schultz and Ryan Whitney proved to be the difference, as Edmonton exploded for four first period goals, after being shutout in back-to-back games.

It was a tough night on both starting netminders, as Ray Emery lasted just over nine minutes, allowing three goals against on nine shots, before being yanked in favour of Corey Crawford. As for Devan Dubnyk, it was a painful night in a different manner, as the Oilers starting goaltender was forced to leave the game midway through the second period, after having been bowled over by Marian Hossa and Teemu Hartikainen.

Yann Danis was forced into the fire against the high-flying Hawks and got the job done, stopping twenty-one of the twenty-four shots fired his way. The "W" was the veteran puckstopper's first NHL victory since December 19th, 2009 and Edmonton's first win in their last six outings.

After going just over 164 minutes without having scored a goal over their previous eight periods of hockey, the Oilers exploded early and often against the best team in the National Hockey League. Recently acquired Mike Brown opened the scoring at the 2:24 mark, as his harmless looking wrist shot somehow slipped through Emery, giving the visitors an early and rare lead.

Just over thirty seconds later, Gagner would snap home a lovely little feed from Magnus Paajarvi, instantly silencing the usually thunderous United Center crowd. Whitney would bring Emery's night to a premature end, just over six minutes later, jumping into the rush and potting his third of the trip, courtesy of an absolutely gorgeous feed from Taylor Hall.

The goaltending change did little to slow Krueger's crew down, as Gagner would bag his second of the period, this one coming on the power play. Just like that, a team that could not get a sniff over their last two games, notched four in less than ten minutes against  the mighty Hawks.

A four goal first period lead would typically be enough to beat almost any team but these Chicago Blackhawks are hardly just any old team. After being thoroughly embarrassed over the opening twenty minutes of play, the Hawks were a different squad in period two. Unfortunately for Edmonton, Dubnyk's ill advised dash to loose puck was, not surprisingly, lost to Patrick Kane and led directly to Chicago's first of the night. From that point on, it was all Chicago.

Hossa would cut the lead to two with his eleventh of the season at the 7:51 mark and a few minutes later, would play a part in bringing Dubnyk's evening to an early end, with what appeared to be a stinger. Enter Mr. Danis.

Despite the Hawks carrying the play, both teams would score twice over the final ten minutes of the second frame. Horcoff and Hall would both tally on the man advantage, courtesy of two perfect feeds from RNH. While Chicago would respond with goals from Sheldon Brookbank and Brent Seabrook.

Edmonton held a two goal "cushion" heading into the the final frame but simply held on for dear life the rest of the way. After being outshot 20-9 in the second, the Oilers dropped back into a "defensive shell" and decided to have Hartikainen and Yakupov spend much of the third period stapled to the bench, in favour of Lennart Petrell and Ryan Smyth.

Kane would cut the lead to one, ripping home his second of the night with twelve minutes to go, after Chicago had been buzzing for what seemed to be an eternity in the Oilers zone. With Edmonton in all out "prevent" mode and the Hawks smelling blood, they poured it on.

If not for a couple of timely stops from Danis and some yeoman's work from Krueger's players in their own zone, in particular the line of Hall, Horcoff and Ales Hemsky, this one likely would have gone to overtime.

The loss was Chicago's first home defeat in regulation this season and puts them, on their first losing streak of the year, after having their twenty-four game undefeated string come to an end in Colorado on Friday night.

The win moved Edmonton past the Calgary Flames into fourteenth place in the Western Conference standings but remain just five points back of the St.Louis Blues for the eighth and final playoff spot. In fact, their total of twenty-three points leaves them just five points shy of top spot in the North West Division, behind the Minnesota Wild and Vancouver Canucks.

The Oilers will end their season high nine game/seventeen day road trip in Colorado on Tuesday night, when they pay a visit to the surging Avalanche. Though Ralph Krueger and company were likely hoping to come home with at least ten points from their extended time away from Rexall Place, to this point, Edmonton has only been able to put together a 2-4-2 record.
Posted by Oil Drop at 7:51:00 am