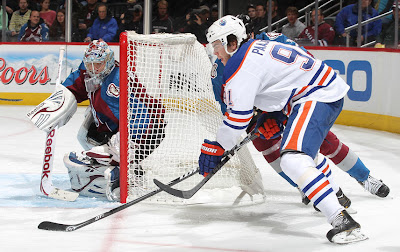 After pulling off what was arguably their biggest win of the season on Sunday night in Chicago, the Edmonton Oilers played their most complete game of year, routing the Colorado Avalanche 4-0 on Tuesday evening. Netminder Devan Dubnyk made thirty-six stops in earning his first shutout of the season. While Taylor Hall, Ales Hemsky, Sam Gagner and Magnus Paajarvi all chipped in with two points a piece.

With the end of their season-high nine game/seventeen day road trip only hours away, the road weary side showed great focus and character in coming out and playing as a solid road period as one could have hoped. First period markers from Shawn Horcoff and Gagner, coupled with some timely stops from Dubnyk both early and late in the frame, paced the Oilers to an early two goal advantage.

Despite falling behind early on, the Avalanche did not go quietly. While neither side generated much in the way of quality chances during the middle stanza, it was a beautiful and frankly, powerful, rush up ice by Paajarvi that put this one out of reach.

The young Swede has been one of the lone bright spots for the Oilers during their time away from Rexall Place, scoring three times on the trip and securing a regular spot within the top nine, if not top six, from here on in. Playing alongside Gagner and Nail Yakupov, the trio had already teamed up with Ryan Whitney on #89's first period goal, Paajarvi blew past Jamie McGinn down the left-hand side, before knocking his own rebound out of mid-air behind a helpless Semyon Varlamov

With this one seemingly in the bag heading to the third, a late power play goal from Ryan Nugent-Hopkins made the night complete, as the former first overall selection notched his second of the season...courtesy of a wonderful feed from Taylor Hall. After failing to draw a single power play opportunity against the Nashville Predators and Detroit Red Wings, Edmonton have connected on the man advantage four times over their last two games.

The win pushed the Oilers into twelfth place in the Western Conference standings and within three points of the eighth and final playoff spot. The two points also pushed the Orange and Blue into third spot in the Northwest Division, just three points back of the second place Minnesota Wild and five behind the Vancouver Canucks.

The Oilers head home with a 3-4-2 record on their extended road swing and will now play seven of their next nine on home ice. Those nine outings will ultimately decide if this team has what it takes to challenge for a playoff spot or if they will look to be among the seller's at the NHL Trade Deadline on April 3rd.

Edmonton will kick-off a four game home stand on Friday night, hosting the Red Wings, and will follow that up with three games next week. They take on the Predators on Sunday night, the San Jose Sharks on Wednesday evening and close out the week against the St. Louis Blues on Hockey Night in Canada.
Posted by Oil Drop at 8:46:00 am