Oilers could still take a run at Northwest Division crown 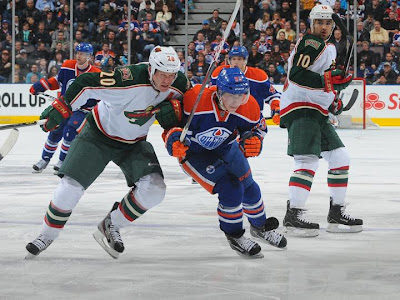 Twenty-fives games into their abbreviated forty-eight game schedule, the Edmonton Oilers find themselves in fourteenth place in the Western Conference standings. While they may only be five points out of the eighth and final playoff spot, the chances of them vaulting over six teams in the next seven weeks are high unlikely...if not next to impossible.

Meaning the only real chance this club has to take a shot at ending its six year hiatus from post-season play, is by taking the Northwest Division title. They may sit in fourth spot but are only five points behind the Minnesota Wild and Vancouver Canucks,.and one point shy of the Colorado Avalanche.

Not an ideal situation by any stretch of the imagination but last time I checked, passing three teams would seem to be a helluva lot easier than six. With Edmonton already having fifteen of their twenty-four road games in the books and number sixteen going tonight against the surging Avs, this may not seem as far-fetched as it sounds.

While the Oilers undoubtedly still have their issues, they are far from the only side struggling within the group. The Canucks look nothing like the dominant side they have been in recent years, whereas the Wild continue to struggle to score goals, despite having the likes of Zach Parise, Mikko Koivu, Dany Heatley and Devin Setoguchiin their lineup.

Through their first eight inter-division games, Ralph Krueger's talented but inexperienced bunch have had mixed results against their Northwest rivals. They have excelled against Colorado, winning two of the first three and have the opportunity to make it three out of four, with a win this evening. Leaving the two sides one more head-to-head matchup, once again in Colorado, come mid-April.

Edmonton has taken three of a possible four points from Vancouver, posting a 1-0-1 record, and will face arguably their biggest rival on three more occasions this season...two of those coming in the friendly confines of Rexall Place, which should be an advantage to the Oilers.

At the other end of the spectrum, is their less than impressive showing against Minnesota and the Calgary Flames. While their lone loss to their provincial rival came early in the campaign, Edmonton will face them three times over a thirteen day span in early April, in what are frankly must-win games.

Which leaves two more games against the Wild, one on home ice on April 16th and another the following week at the dreaded Xcel Energy Center on April 26th, as Edmonton will try to avenge a pair of back-breaking defeats..

Ten of  the Oilers final twenty-three games are within the Northwest and fourteen are on home ice. If they can manage to hold their own against the rest of the West, which typically they seem to do, this team could make up some ground and possibly turn the race for the division crown into a four horse race.

Taking all that into consideration and the fact this team has inexplicably struggled to score goals throughout the first twenty-four games, perhaps they might have a better chance than most think. Should the likes of  Jordan Eberle, Taylor Hall and Ryan Nugent-Hopkins catch fire over the last half of the season, getting a little help along the way from the bottom six, this team may just find themselves playing some important  games come late April...regardless of where they ultimately end up in the standings.
Posted by Oil Drop at 12:19:00 am