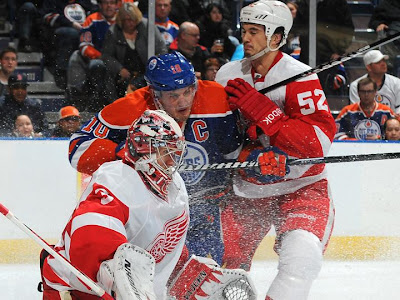 For forty minutes, the Edmonton Oilers played a perfect game. Unfortunately for them, two periods of hockey rarely wins you a game and almost guarantees you a loss against a team like the Detroit Red Wings. Pavel Datsyuk did what Pavel Datsyuk does, scoring the OT winner, and Jimmy Howard was outstanding, turning aside thirty shots, in helping the Wings to a crucial 3-2 come from behind victory in Friday night NHL action.

Making their first appearance on Rexall Place ice since returning from their season high seventeen day road trip, Ralph Krueger's side set the pace from the outset and were rewarded with an early lead. Taylor Hall took full advantage of the Red Wings defence parting like the Red Sea, attacking the goal and firing home his sixth of the campaign past Howard.

It was the start of a brilliant performance from the Oilers youngster, who was by far and away the best player in either uniform. As Red Wings head coach Mike Babcock told a media scrum after the game, "that's the best I've seen him play since he's been in the NHL". High praise indeed...especially coming from arguably the best coach in the world.

Edmonton squandered a glorious opportunity to bury Detroit early, going scoreless on a couple of first period power play opportunities. Not surprisingly, it would come back to haunt them.

After holding the Wings to just five first period shots, the Oilers continued to push the pace from the drop of the puck in period two. However, the Wings starting netminder was more than up to the task, making a number of huge stops, none better than his sprawling save off a brilliant individual rush from Ales Hemsky.

To their credit, Edmonton kept coming and would extend their lead before the period was out, courtesy of yet another goal from Sam Gagner. The Oilers leading scorer continued his break-out campaign, shoveling his eleventh of the year behind Howard, after some hard work from Hall and rookie Nail Yakupov.

With twenty minutes to go, a two goal cushion and playing as solid a home game as they had played in some time, this one looked to be in the bag. Apparently Krueger and his staff were not nearly as confident, as the Oilers inexcusably  fell back into a defensive shell. Typically not a good idea for this team at the best of times and simply a bad one against a side with a lineup like Detroit.

Valtteri Filppula would cut the lead to one, roofing a backhand past a screened Devan Dubnyk, at the 4:27 mark and from that point on, it was all Detroit. After being outshot 26-14 over the first forty minutes, the Wings turned the tables in the third, outshooting Edmonton 13-6, and badly tilting the ice toward the Oilers zone.

After failing to score on two earlier power play opportunities, the visitors would convert on chance number three...with just a little bit of help from Jeff Petry. Niklas Kronwall was credited with the 2-2 power play marker but it was Petry who accidentally fired the puck into his own net, after misfiring on his clearance attempt.

Obviously a tough break for the Orange and Blue but one that was almost deserved, after deciding to turn their back on what had been successful in the previous forty minutes. It was an important point lost to the the ninth placed Wings but one made even worse, after Datsyuk broke their hearts of fans throughout Oil Country.

While Petry and Dubnyk were made to look foolish on the highlight reel winner, Gagner and Ryan Whitney can share in wearing the goal horns.Whitney simply stood and watched Johan Franzen send a cross ice feed to the streaking Russian, instead of pressuring the big Swede into a more difficult play. While #89 arguably made the most egregious play of all, as he floated down the middle of the ice, totally oblivious to his man breezing through the neutral zone behind him.

It was a comedy of errors but a fitting way to end a night, that had looked to be so promising.
Posted by Oil Drop at 8:11:00 am