Hemsky's days in Oilers silks appear to still be numbered 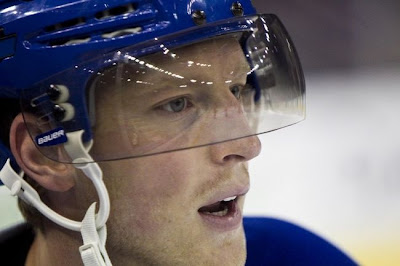 Despite rebounding from what was just a horrible 2011-2012 campaign, Ales Hemsky appears to be on his last legs as a member of the Edmonton Oilers. While the silky smooth winger and General Manager Steve Tambellini agreed to what was a very fair 2yr/$10 million extension leading up to last season's NHL Trade Deadline, the addition of Nail Yakupov and a need for change, will ultimately cost the twenty-nine year old his spot.

For those that watch the Oilers on a regular basis, it is obvious they are missing something upfront. Undoubtedly, some of that has to do with the inexperience within their core group but the overall lack of size, grit and veteran presence has played an even bigger role in their struggles. Oddly enough, this management team decided to not address any of these issues heading into 2013 but the time has come for them to start looking for answers.

At the moment, Ralph Krueger has put together a semblance of what some may view as three scoring lines. A healthy Shawn Horcoff has allowed the Oilers bench boss to use Taylor Hall and Hemsky alongside the captain, with Sam Gagner centering the duo of Yakupov and Magnus Paajarvi. Both trios have looked good since Horcoff's return but there is one glaring omission...no one to play with Jordan Eberle and Ryan Nugent-Hopkins.

No offence to Teemu Hartikainen and Ryan Jones but neither is a good fit in the here and now nor moving forward. The feisty Finn could possibly grow into such a role but seems to be better suited as a bottom six winger/power play specialist. Meaning, at the very least, another very important piece of the puzzle still needs to be added to the equation.

Unfortunately, bringing in another top six forward and trying to re-sign Gagner, simply won't work from a cap number standpoint. In the short-term, it would not be an issue, as Hemsky only has a year remaining on his two year deal. However, if this organization truly wants to change their look upfront and make them a much harder team to play against, keeping both #89 and #83 come 2013-2014, would make that an impossibility.

Should Gagner sign an extension, adding a bigger body into their top three lines, won't make enough of a difference. In my mind, be it a centre and a winger or two wingers, Tambellini and company have to add two bigger forwards into the mix. It is no longer just an option If they want this team to show a marked improvement, it's a necessity.

As good a player as Hemsky is, if the Oilers were sold on him being part of their future, they would have signed him to a lengthy extension last season. For various reasons, that did not happen and in all honesty, had the organization known they had the #1 selection in the 2012 Entry Draft in their pocket, they likely would not have re-signed the talented Czech at all.

Let's not forget, this club has other holes that need to be filled, most notably on the blueline. With the UFA market looking to be less than stellar when it comes to defencemen, not to mention the uncertainty surrounding Ladislav Smid, an upgrade would likely have to come via trade. Which points to roster players, picks and prospects going the other way..

As far as roster players go, Eberle, Hall, Nugent-Hopkins, Justin Schultz and Yakupov are going nowhere, leaving Gagner and Hemsky as their only real movable assets. Does that mean Ales Hemsky will be moved by the April 3rd Trade Deadline? Not at all but it does mean the chances of the veteran winger still being around come 2013-2014, are rather slim.
Posted by Oil Drop at 10:10:00 am