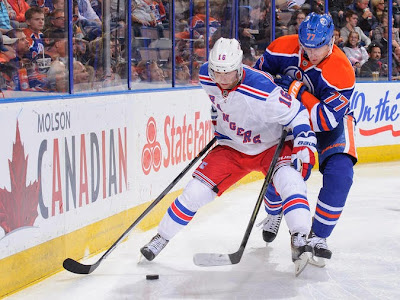 He may have arrived late to the Edmonton Oilers training camp due to visa issues but defenceman Anton Belov has done nothing but impress since his arrival to the Alberta capital. In just under two weeks, the talented Russian has already shown enough to cement himself a spot inside the top six and don’t be surprised to see him push for a bigger role as the year progresses.


While he may need time to adjust to the North American style of game, the man many believed to have been the premier defenceman in the KHL during the 2012-13 campaign, isn’t exactly coming into this blind. At twenty-seven years of age, Belov should be more than capable of adjusting to life in Edmonton without being in the least bet overwhelmed.

The 6’ 3” defenceman will not only add some much needed size to the Orange and Blue’s blueline but give head coach Dallas Eakins a guy who apparently has never seen a puck he doesn’t love to fire on net. Through four preseason appearances, Belov led all Oilers D-men with ten shots on goal, with Philip Larsen and Justin Schultz being next on that list with four a piece. In fact, he was among the team leaders in shots on net with names such as Jordan Eberle, Taylor Hall and Nail Yakupov.

Having a player that is not only willing to blast the puck on goal but actually enjoy doing so, is generally a plus for a team with as much talented upfront as the Oilers possess. Be it the likes of a Eberle, Hall, David Perron or Yakupov lurking about for a rebound or a Jesse Joensuu or Ryan Smyth causing havoc in front of the opposing team’s crease. The more pucks that get to the net, the better chance one of those guys knocking one across the goal line. Pretty simple stuff but sometimes simple isn’t quite so sexy.

Belov isn’t overly flashy but his booming point shot could be exactly what has been missing from an Oilers power play that has steadily improved since the arrival of Ryan Nugent-Hopkins. Once they return to full health, Edmonton could very well run with two units featuring four forwards and one D-man. Making the Russian rearguard the probable point man on the second unit but one who should be more than capable of pushing Schultz into the power play stud most project him to become.

Heading into Tuesday’s season opener, it looks as though the Oilers #77 will be a part of a very intriguing third pairing with veteran Nick Schultz. With the quartet of Andrew Ference, Jeff Petry, Schultz and Ladislav Smid expected to do much of the heavy lifting at even strength, the Belov-Schultz duo will need to keep things as simple as possible at five-on-five.

The senior Schultz remains a solid stay-at-home defender who was asked to do far too much during the 2013 season, playing alongside the younger Schultz in a top four pairing role. At his stage of his career, the thirty-one year old is best suited for a bottom pairing minutes and with Belov as his partner, they just may turnout to be as good a #5/#6 tandem the Oilers have had for some time.

Though he has only played four games, Belov has already shown to be as good or an even better distributor of the puck as fellow countryman and teammate Denis Grebeshkov. Like Grebeshkov, he sometimes forces the puck into areas of the ice most players wouldn’t even dream of looking but that sort of comes with the territory.

Defencemen who are confident enough to attempt such passes are generally players who you want on your roster. Is there a risk/reward factor to using guys like that on your backend? Most definitely but with the Oilers entire mantra revolving around their blueline’s ability to transition the puck up ice, it is somewhat of a necessary evil.

Expecting Anton Belov to walk into the National Hockey League and step into a top four role would probably be asking a little too much. He will undoubtedly go through his share of growing pains during the course of the season but he has all the tools necessary to become exactly that. It could go either way but GM Craig MacTavish may have unearthed a real gem of a player for the organization.