RNH in = Arcobello out and a chance at a successful October 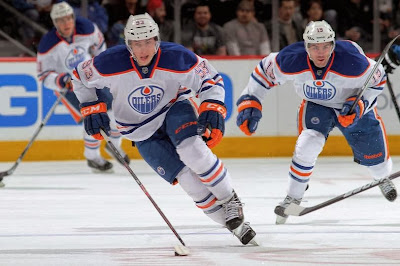 With Ryan Nugent-Hopkins taking part in full contact drills during practice on Thursday morning, it looks as though the Edmonton Oilers will finally let the cat out of the bag.

RNH is nearly ready to go.

Despite earlier suggestions that the timetable for his return remained November 1st,  that always appeared to be nothing more than a precautionary smokescreen. Barring any sort of setback, Nugent-Hopkins was always coming back sometime during the opening week or two of the season.

While adding #93 back into the mix will go a long way in helping address the club's lack of depth down the middle, it also brings an end to the Mark Arcobello experiment. The diminutive centre hasn't looked out of place playing inside the Oilers top nine but with Boyd Gordon and Taylor Hall ahead of him in the pecking order, the writing is on the wall for Mr. Arcobello.

In a perfect world, reuniting the trio of Jordan Eberle, Hall and Nugent-Hopkins would be ideal but with Sam Gagner still out of action with a broken jaw, that won't be happening anytime soon. However, with the Nuge on the verge of making his return, Dallas Eakins will have some options at his disposal for his top three lines.

Once Gagner returns and Hall moves back to the wing, the combinations could be endless for the rookie bench boss but for the moment, the two options that appear to make the most sense look to be the following.


While both groupings have potential, neither have a suitable third line setup. Hemsky has looked fantastic from the moment camp hit and seems primed to have a big year, if used in the right situation. Playing him with Gordon and Ryan Smyth would not be that situation. We saw last season that the old Smyth - Horcoff - Hemsky trio had little to offer and in my opinion, this would not be much different.

At this stage of the game,  Hemsky needs to play with other skilled players to keep his engine running. Once Gagner is deemed fit to go, the talented Czech might find himself playing alongside Gordon but could very well have David Perron as his running mate...which is the exact type of line this team has been missing for some time.

So why risk losing a rejuvenated #83 for something that likely won't even pan out? In my mind, you don't.

Which leaves us with the trio of Smyth, Gordon and Nail Yakupov, as a temporary third line solution. Smyth wasn't overly effective when he saw time with the talented Russian last season but as a short term fix, it looks to be the best option. The line of Yakupov, Gordon and Jesse Joensuu looked decent in the opener against the Winnipeg Jets and outside of size and age, #94 plays the exact same game as Joensuu.

Neither one skates well but both are a handful along the boards and in front of the opposing team's net. Also, it would allow Eakins to give Yakupov the security blanket of having not one but two defensively responsible linemates at even strength. Is it ideal? Probably not but it is very workable for the time being.

As expected, Eakins proved in the season opener that he has no problem double shifting guys and just throwing combos out if things are not going to his liking. That isn't going to stop anytime soon and should keep players on their toes at all times. Guys are going to have to earn their minutes but with the Oilers employing the type of fourth line they are, there will be than enough minutes to go around.

Once they get healthy, this team could be looking at a potential top nine that looks something like this:


Not sure about all of you but that sure looks like a pretty imposing top nine to be facing on a nightly basis. If they can simply hold their own through the first four or five weeks of the season, this team should be fine moving forward. The early return of Ryan Nugent-Hopkins should allow them to accomplish exactly that.
Posted by Oil Drop at 10:22:00 am