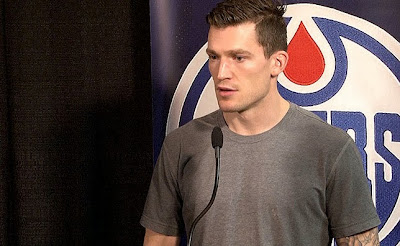 One of the biggest reasons Andrew Ference was brought on board by the Edmonton Oilers was his overall experience and leadership abilities. While the thirty-four year old is no longer the player he once was his winning pedigree is something the Oilers dressing room has been missing for ages.

Making today’s announcement of the veteran rearguard being named the 14th captain in franchise history, an absolute no-brainer. While many have suggested the time had come for a guy like of Taylor Hall to grab hold of this club and make it his own, both on and off the ice, head coach Dallas Eakins clearly thought otherwise and this year’s edition of the Edmonton Oilers should benefit greatly because of it.

As far as Hall goes, I have been driving the bus for Taylor Hall to be this team’s eventual captain for nearly two full years but the time for him to take on that responsibility is not now. How I saw it back than and still currently do, is the former first overall pick needs to focus on getting his game to the highest level possible and leading this team on the ice.

There is no question that Hall is the straw that stirs the Oilers drink. That said, to ask a twenty-one year old kid to not only learn a new position heading into 2013-14 but also add the pressure of being the captain of one of the league’s most storied franchise, which has now missed the playoffs for seven consecutive years, would have been simply foolish.

In my mind, the perfect time for Hall to take over the captaincy on this club has always been in a year or two from now. Basically, whenever Shawn Horcoff left town, #4 would become captain. That all changed the moment general manager Craig MacTavish was able to move Horcoff to the Dallas Stars.

Handing over the reigns to Hall at twenty-two or twenty-three years of age with a year or two of playoff hockey under his belt is one thing. However the Oilers current situation is something completely different. Making the move now, would have been taking an unnecessary risk, with almost nothing to gain.

In all likelihood, Eakins decision never came down to who would be the Oilers captain this season but rather if he would have one at all. If he was going to name a captain, it was always going to be Ference. The only other real option he had at his disposal was to run with no captain and go with four alternates for the upcoming season.

Had he gone that route, you could have all but stitched that “C” on to Hall’s jersey for the 2014-15 campaign. Instead, we have a situation where Ference has replaced Horcoff and help bridge the gap for a couple of years. To his credit, Eakins let things play out before making his decision public but in the end, it was the only move to make.

From the moment he arrived in town, Ference has engulfed himself within the local community, while setting a new standard and expectation level for players inside the dressing room. You can hear it in every player’s voice that talks about the former Boston Bruins blueliner. His professionalism and recent “team success” has everyone’s attention.

There are those who may not believe it but make no mistake, this group is tired of losing and want nothing more than to start winning hockey games. At this stage of the “re-build” individual statistics mean nothing to the guys in that room. All that truly matters is that win column.

Unfortunately for them, they don’t know how to win at this level. It is really that simple. As much as Shawn Horcoff wanted that happen, even he started to lose belief with one failed attempt after another. Some look at that as a strike against the former captain, when in reality, it was nothing of the sort.

At the end of the day, if the Edmonton Oilers had any hope of moving forward with this group of young talented kids, they needed to change things up. Both the messages and voices delivering those messages had grown old and lost their impact.

Craig MacTavish is betting on the addition of Dallas Eakins changing that overall mindset. Subsequently, the Oilers new bench is expecting the exact same thing from his new captain. Taylor Hall summed it up best when asked about Ference being given the “C” for the upcoming season.

"I think it's great. He's had a lot of experience winning and that's important for our group. We don't really have a lot of that especially with the young guys here. He's really taken charge off the ice and on the ice. He's a great player and a good guy. I think it's the right move for us."