Two points dropped that could come back to haunt 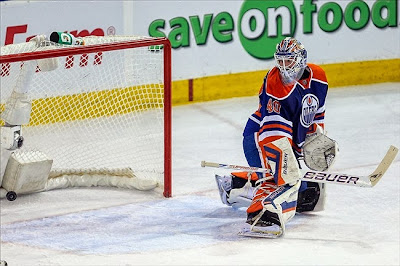 After watching the Edmonton Oilers hand the Winnipeg Jets two points on the opening night of the 2013-14 schedule, I couldn't help but wonder if that result might not just come back to haunt them at the end of the regular season. Over the course of an 82 game schedule, teams will generally win a handful of games they have no business winning and conversely drop a few that should have been in the bag. It's the nature of sport.

That said, those wins and loses typically come courtesy of a goaltender standing on their head. On occasion you may see a player go out and "steal one" on his own but more often than not, it comes down to a goalie carrying his team to victory. Unfortunately for the Oilers, that wasn't the case on Tuesday night.

Edmonton was by far and away the better team and yet still found themselves on the losing end after the final buzzer. Winnipeg did not receive a great performance from netminder Ondrej Pavelec in between the pipes and in fact, he was no better than average on the night. Upfront Michael Frolik had a solid night and scored a couple of goals, while rookie D man Jacob Trouba looked great in his NHL debut. However, neither did enough to warrant saying they were the reason the Jets walked out of Rexall Place with two points they had no business getting.

And yet here we sit, with the Oilers having pissed away another home game that they frankly can't afford to giveaway. This team is not at the stage where they can simply take the approach of "it's only one game" or "it's the first game of the season". While both of those points may be true, at the end of the year, the two points you get in Game #1 are worth the same amount in the standings as the points you earn from Game #82.

That may sound like nothing more than a cliche but that doesn't make it any less accurate. Which makes the loss of those points all the more disappointing. Obviously Devan Dubnyk wasn't very good in the opener and literally cost his team points in the standings. Could he make up for it over the course of the season? Sure but like every other goalie in the NHL, expectations will be for him to steal the odd game already. The loss to the Jets will only add to those expectations and put even more pressure on the twenty-seven year old tender.

With Sam Gagner and Ryan Nugent-Hopkins on the sideline to start the season, collecting points over the month of October won't come easy for Dallas Eakins and his squad. Having said that, if the plan is to have this team fighting for a playoff spot come next April, they will need to do exactly that and Dubnyk will have to play a key role.

In order to reach the post-season the Edmonton Oilers are probably going to need somewhere in the neighbourhood of 95 points. Considering those points will need to come from a pool of 164, that's no small task and after Tuesday's debacle, that number is now down 162. Most may say this is nothing more than an overreaction but if the Oilers end up two points shy of grabbing a Western Conference playoff spot, it will be hard to not look back at this game and wonder what might have been.
Posted by Oil Drop at 11:38:00 am