2013-14 Preview: Dubnyk will need to carry the load early 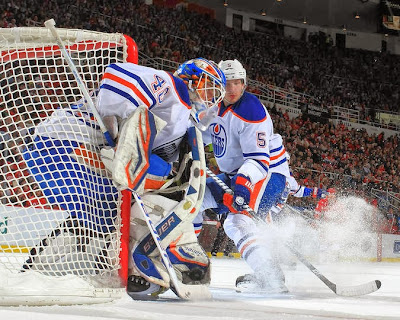 The Edmonton Oilers will kickoff their 2013-14 schedule against the Winnipeg Jets on Tuesday night at Rexall Place. After missing the playoffs for seven consecutive years, both the organization and its fan base are ready to see this team finally take a step forward and make their long awaited return to the post-season.

Like every team in the National Hockey League, the Oilers will have to overcome some challenges in order of having any hopes of achieving that goal. Starting the year with both Sam Gagner and Ryan Nugent-Hopkins on the sidelines, qualifies as one of those so-called challenges. This team will need to find a way to survive the opening month of the season and keep themselves in the Western Conference playoff mix.

With the situation being what it is, there is no question Dallas Eakins will need his players to come out of the gate swinging and hope they can catch a few of their opponents by surprise to start the year. While they will have to rely heavily on the likes of Jordan Eberle, Boyd Gordon, Taylor Hall, Ales Hemsky, David Perron and Nail Yakupov to get them through this stretch, the most important part of the equation remains their goaltending.

Craig MacTavish went out and signed veteran Jason LaBarbera to solidify their depth at the NHL level and to help lighten the load on his #1 netminder. With this being an Olympic year, every team's schedule is far more compact than usual. Clearly the addition of a solid #2 goalie was very necessary, making the Labarbera move a no-brainer.

That is all well and good but at the end of the day, this team will only go as far as one Devan Dubnyk can carry them. In a perfect world, the Oilers would love nothing more than to have their #1 netminder at his very best to start the year and put this team on his shoulders over the opening few weeks of the season.

Should he be able to deliver the same sort of performance that former starter Nikolai Khabibulin did during the opening month of the 2011-12 season, the organization would be tickled pink. While not everyone is sold on the 2004 first round pick being a top half of the league starting goalie, his stats tell a different story.

Amongst 2013 starters, Dubnyk posted a Top 15 save percentage at .920 and was sixth in the league for shots faced and saves. Considering last season was the former fourteenth overall pick's first year as a true #1 guy, it is rather difficult to not be impressed with his overall performance. While that may be true, when it comes to Devan, the problem has never really been on how many pucks he stops but rather when he allows the soft goal to get behind him.

In his defence, allowing the odd weak goal against comes with the territory. Every goalie has had pucks get past them that they would love to have back. However, the difference between top end guys and the rest of the pack, is when they allow that ill-timed goal against and if they are capable of making the big save when their team needs it most.

Dubnyk has shown the ability to do the latter but has struggled mightily with allowing the "softie" at the worst possible moment. As good as the Oilers #40 was during the 2013 campaign, he gave up a momentum changing goal in nine of his thirty-seven starts. That is 25% of his starts and works out to roughly one every four games. In order for this team to have any hope of returning to the playoffs, that number needs to dramatically improve.

If he can accomplish that, the Edmonton Oilers could very well find themselves making that trip back to the playoffs for the first time since their run to the 2006 Stanley Cup Final. Overcoming the loss of their top two centres won't be easy but if this team gets the performance they need from their #1 goalie, it will be a moot point.

With his contract expiring at season's end, the pressure will be on the big man to come up with a huge season in 2013-14. Obviously he would love nothing more than to prove his worth to the organization and sign a long term deal to remain in Orange and Blue. However at twenty-seven year's of age, he will be staring at the opportunity of becoming an unrestricted free agent next summer and a potential big day.

No matter how you cut it, this season will be a watermark moment in the career of Devan Dubnyk and the Edmonton Oilers are hedging their bets on it being a positive one.