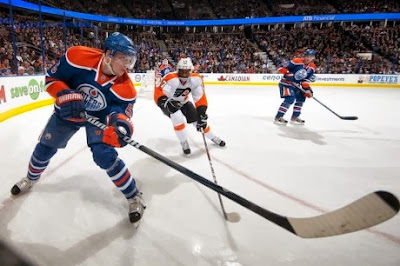 After two seasons of being more or less used as a top pairing guy on Edmonton's severely undermanned blueline, the former first round pick of the Anaheim Ducks has started to take on the role of a depth player under his new coach. With that being the case, one has to wonder if the twenty-seven year old's days may be numbered in Oilers silks.

During the 2013 season, Smid played under seventeen minutes on just four occasions during his 48 appearances and only once did he see under 16 minutes of action.  We all remember that night for two reasons. Smid being assessed 23 minutes in penalties and Nail Yakupov's last second goal which made the youngster an overnight sensation across the National Hockey League. Despite being in the box for almost half that game, the Oilers #5 still saw just under twelve minutes of time.

Smid averaged 20:19 last season after leading all skaters in actual playing time during the 2011-12 season and playing 20:54 a night. Three weeks into his time under Eakins guidance and he is down to 17:04 a night and coming off a season-low of 14:14 against the Ottawa Senators. That marked the second time the tough as nails rearguard has been used for less than 15 minutes. So again, what gives?

If the Oilers had upgraded their backend to the point where Smid was legitimately a bottom pairing guy and had simply fallen down the depth chart, than so be it. However, that has not been the case at all. While both Belov and Ference have helped improve the blueline depth, you would be hard pressed to show me how either have passed Smid as a better five-on-five option.

The former Boston Bruins blueliner has arguably been no better than the Oilers #5 but yet continues to see his regular minutes and the talented Russian has either been real good or an absolute train wreck when partnered with Justin Schultz.

With the additions GM Craig MacTavish made in the off-season a decrease in Smid's playing time was a no-brainer but not to this degree. Obviously there are aspects to his game the rookie coach isn't a fan of, can you say like of puck moving skills?, and with Edmonton still in the midst of re-building/re-shaping their roster, the 6' 3" stay-at-home defenceman could become trade bait.

Odd considering he just signed a four year extension prior to last season's Trade Deadline to remain in the Alberta capital but not so much when you realize neither Eakins or MacTavish had any real say in that decision. If anything, the fact he is signed for an additional three years at a $3.5 million cap hit, makes him even more of a bargaining chip for MacT to dangle.

In my mind, the moment Eakins announced almost a third of his roster as alternate captains and Ladislav Smid wasn't included, the writing was on the wall. He has long been considered one of the "younger" leaders in the dressing room for sometime and is apparently loved by his teammates.

Yet his name was mysteriously absent from the list.

Could this all just be a coincidence? Possibly but actions generally speak far louder than words and to this point, all signs are pointing to a move eventually being made...and perhaps far sooner than anyone might think.
Posted by Oil Drop at 8:44:00 am