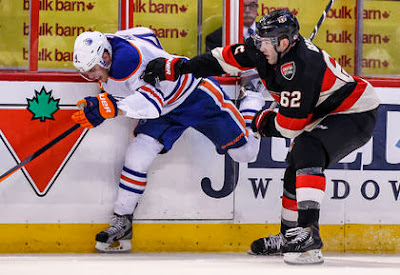 Having said that, with the Oilers currently sitting in the basement of the Western Conference standings with a dreadful 2-6-1 record, losing their best player could not have come at a worse time. While Sam Gagner is likely 10-14 days away from making his return from an yet another ill-timed injury to an Oilers forward, it will not be enough to address the absence of #4.

With Jesse Joensuu still out of action with a bad back and Ryan Smyth expected to miss about a week with a groin injury, here are the players Dallas Eakins will have at his disposal to currently use inside his top nine.

Not sure about any of you but I only see seven names there. While Ryan Jones and Tyler Pitlick will get the first crack at playing third line minutes against the Montreal Canadiens, who's kidding who here? Even if you add Gagner to that list, how on earth is that group of forwards going to help the Oilers move up the standings?

If the club's assessment of Hall's recovery time is accurate, he will miss thirteen games, eight of which will be on the road. During that stretch they will face teams like the Chicago Blackhawks, Detroit Red Wings, Los Angeles Kings and San Jose Sharks, not mention matchups with Alex Ovechkin and Steven Stamkos.

With the reality of the situation being what it is, one would think the Oilers GM would be looking to improve his team in the immediate future. That is of course if the plan is to still try and reach the playoffs for the first time since 2006. Should this organization decide to stand pat and simply allow the chips to fall where they may, one would have to seriously question whether that is actually still the mindset.
Posted by Oil Drop at 10:33:00 am