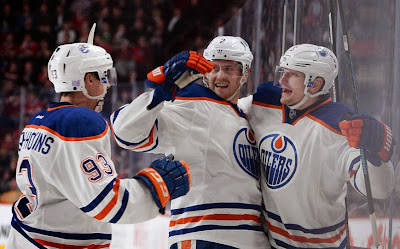 Mark Arcobello continued to impress and keep his critics shaking their collective heads in disbelief, picking up another pair of assists on the night, while both Jordan Eberle and Ryan Nugent-Hopkins followed suit with two point efforts of their own. Rookie forward Tyler Pitlick made his NHL debut, playing just under twelve minutes and not looking the least bit out of place on a line with Boyd Gordon and Ryan Jones.

While the shot clock looked completely out of whack and in favour of the Habs, 14-8, heading into the first intermission, in reality it had more to do with a complete collapse by the Oilers in the final moments of the frame.. With just under five minutes to go in the opening stanza, the Canadiens held 6-5 edge on the shot clock and Devan Dubnyk had been called upon to make one great pad stop off Brendan Gallagher roughly five minutes in.

Outside of that, Edmonton had kept Montreal at bay for much of the period. Over the final 4:44, the visitors managed to not only get out shot 8-3 but also outscored 2-0 in what was roughly a span of ninety seconds. It all started courtesy of the Nugent-Hopkins line, as the trio of Eberle, RNH and Nail Yakupov proceeded to cough up the puck four times in just over a minute and a half.

With Edmonton unable to get the puck out of their end, Luke Gazdic would eventually pull down Rene Bourque to put the Canadiens on the man advantage, after mysteriously being the guy who jumped on the ice to replace Yakupov, All of six seconds later, Tomas Plekanec had wristed home his fourth of the year to give Montreal a 1-0 lead.

An absolutely god awful giveaway from Ryan Jones would leave Gallagher a wide open lane to net and the feisty winger made no mistake, beating Dubnyk to glove side with a nifty little finish. Just like that, a scoreless game turned into a two goal deficit and Dallas Eakins looked as though  he was ready to blow.

Whatever the rookie coach said between periods worked, as the Oilers came out refocused and with a purpose to the start the second. Dubnyk would be called upon to make a couple of more key stops to keep Edmonton within striking distance and mere seconds after getting a piece of Alex Galchenyuk's point blank opportunity, his teammates would reward their goaltender for his timely work.

Ales Hemsky would slip a shot through Carey Price at the 12:50 mark that the Canadiens starter would likely love to have back. Unfortunately for Price, there would be no mulligan coming his way but Edmonton was just getting started. From the point on it would be all Oilers. It got so bad at one point that you all most forgot what Dubnyk looked like down at the other end of the rink.

Smid what get Edmonton back on level terms with just under four and a half minutes to go, as the stay at home defender pounced on a juicy rebound, after the Nuge was turned away on what was a decent look from the slot. The goal was Smid's first in twenty-four games and gave the Oilers all the momentum moving forward.

They would carry that momentum into period three, as Petry would pot his second of the year courtesy of a lovely give and go with Nugent-Hopkins and the two teams playing four aside. Eberle started the entire sequence in the Oilers zone, kicking the puck up to a streaking Petry and sending the duo on their way.

Jones would increase the lead two minutes later, notching his first of the year into a yawning cage, after yet another ugly rebound from the Canadiens staring netminder. After basically handing Montreal their second goal on the night, scoring what turned out to be the eventual game-winner had to be sweet for the Oilers #28.

Montreal would make it look a little more respectable on the scoresheet when Brian Gionta slipped one past Dubnyk with less than two seconds to go but in the end it was nothing more than a goal for the Canadiens captain to pad his stats with.

Prior to the game, Montreal forward Lars Eller created a bit of a stir with the following comments he made about what it's like playing against a team like the Oilers.

"It's hard to say. It can be anything, you know? They play a little bit like a junior team, I think, sometimes," he said when asked what the Canadiens could expect from the Oilers. They take a lot risks, a lot of chances. They’re a little all over the place. There’s not a lot of structure always in their game. It can really be anything. You don’t know. I prefer a little more structured game. Then again, I don’t mind high-scoring games, too. Obviously, we’re going to try with their skilled players to limit their chances."

Obviously some fans took offense to the statement but in all honesty, Eller's description was pretty much dead on. That said, Eakins wasn't impressed with the comments and couldn't resist taking a shot at the Habs young forward in his post-game press conference.

"When you have a player like Lars Eller running his mouth before the game, it makes for great banter in our dressing room, and a great motivation. So we thank Lars Eller for his comments before the game. Awesome."

Considering how badly the first four games of the Edmonton Oilers six-game road trip went, one would have to say the word "awesome" accurately describes how the final two turned out. Of course, the one exception being losing Taylor Hall for the next month so.
Posted by Oil Drop at 6:08:00 pm