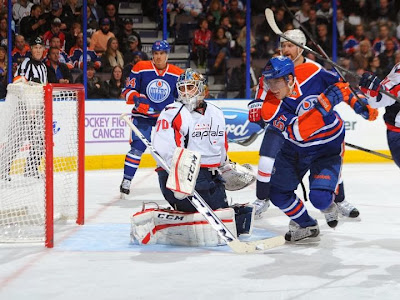 For the second time in ten days the Edmonton Oilers got a first hand look at the good Braden Holtby and for the second time walked away shaking their heads. Two point efforts from Washington's top line of Nicklas Backstrom, Marcus Johansson and Alex Ovechkin proved to be too much for the road weary Oilers to handle, falling 4-1 to the Capitals on Thursday night.

Holtby stopped 30 of the 31 pucks fired his way to earn his third straight win, while Edmonton's Devan Dubnyk continued to struggle on home ice, allowing four goals on 26 shots and falling to 0-3 at Rexall Place on the season. Defenceman Justin Schultz was the lone Oiler to beat Holtby on the night, potting his first of the season late in third period, breaking the Caps starter's bid for his first shutout of the year.

In what is a bit of a scheduling anomaly, Dallas Eakins' crew returned home for just one game after a gruelling eleven day/six game road trip, only to head back on the road for a pair of weekend tilts against the Phoenix Coyotes and Los Angeles Kings. Not exactly the easiest nine game stretch in the world to deal with at the best of times, never mind for a team like the Oilers who are missing a number of regulars due to injury.

Edmonton's top line of Jordan Eberle, Ryan Nugent-Hopkins and Nail Yakupov had a tough night, going a combined -12, despite having created a number of chances over the opening forty minutes of action. That said, each of them played a staring role in three of the four goals the Caps scored.

After putting together what was arguably their best first period of the season on home-ice, a brain-cramp from Yakupov, on  late defensive zone face-off, would prove costly. Be it a missed assignment or just getting caught cheating, Yakupov decided to leave Ovechkin unmarked after the drop of the puck and in a blink of an eye it was 1-0 Caps. The Great 8 rifled home his league leading 10th of the season, and 32nd in his last 31 games, on a shot that no goalie on this planet had a prayer of stopping.

A hard forecheck from the Capitals duo of Jason Chimera and Joel Ward would force a late turnover from Justin Schultz, leading directly to Ward's third of the season. While it did look as though the big winger made contact with Dubnyk prior to redirecting home John Carlson's point shot, no call was made and Washington had themselves a two goal cushion heading into the intermission.

The Caps would make it 3-0 early in third, as Backstrom rag-dolled Nugent-Hopkins in the Oilers zone for roughly fifteen seconds, before finishing off a brilliant tic-tac-toe sequence for his second on the year.The goal was a thing of beauty and from that point on, it was game, set and match.

Mikhail Grabovski would add insult to injury, stealing the puck from Jordan Eberle at the Capitals blueline and springing Jason Chimera on a break and the former Oiler made no mistake, beating Dubnyk high to the glove side to make it 4-0.

In Edmonton's defence, they generated a number of quality chances over the opening forty minutes but Holtby was more than up to the challenge. The Caps starter made an absolutely ridiculous stop off David Perron in the second period with the score still 1-0 and followed that up with a stunning pad save off Nugent-Hopkins in the dying seconds of the period, keeping the visitors two goal lead intact heading into the intermission.
Posted by Oil Drop at 10:52:00 am