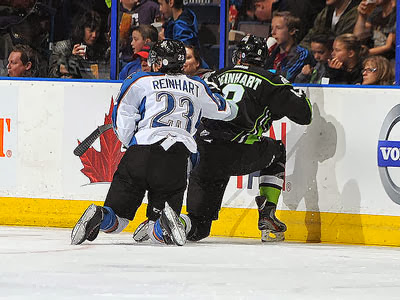 Collin Shirley would open the scoring for the Ice with a PP goal at the 9:45 mark, redirecting Zach McPhee's point shot past Santos for his first of the year. The goal came mere seconds after the Oil Kings starter made a couple of huge stops in tight to keep the game scoreless.

Edmonton would get that one back before the period was out, as Curtis Lazar tipped Aaron Irving's blast through Skapski for goal number nine, after the Kootenay tender had made a trio of wonderful stops prior to Lazar's face-off win. The Ottawa Senators draftee continues to dominate since returning from NHL camp and now has 16 points in just eight games.

Derek Laxdal's side would grab their first lead early in period two as the red-hot Mitch Moroz continued his dream start to the 2013-14 campaign.. The 2012 second round pick of the Edmonton Oilers has already managed to find the back of the net eleven times, after struggling mightily during the 2012-13 season and scoring just thirteen goals in sixty-nine games.

This time around  it would be Kootenay who would respond, thanks to yet another power play goal. Jaedon Descheneau finished off a lovely tic-tac-toe with Luke Philp and Sam Reinhart, beating Santos from the lip of the crease for his ninth of the season.

Reinhart continues to collect points at a ridiculous clip for the Ice, as the draft eligible younger brother of Oil Kings captain Griffin Reinhart currently sits second in WHL scoring with 23 points in twelve games. Only Spokane Chiefs sniper and Sherwood Park native Mitch Holmberg has been better,  with his jaw dropping totals of 16 goals and 32 points.

Levi Cable would put Kootenay back in front nine minutes into period three, beating Santos on the glove side with a great finish but that lead would not last long. A beautiful individual effort from Henrik Samuelsson would get the Oil Kings back on level terms, all of forty seconds after Cable gave the Ice ice their second lead of the night.

Kootenay would be given a glorious opportunity to regain the lead with just over seven minutes to go, as Reinhart was brought down by defenceman Ben Carroll on a clear-cut breakaway and was awarded a penalty shot for his efforts. Luckily for coach Laxdal, his backup goalie was more than up to the task, making it look rather easy in turning aside the WHL's second leading scorer.

Unfortunately a late roughing penalty to Moroz would prove to be rather costly, as Hudson Elynuik would notch the visitors third power play goal of the night and eventual game-winner at 17:52. Edmonton's leading scorer would get a chance at redemption in the dying seconds but was stoned by the pad of  Skapski to preserve the win and allow the Ice to jump two points clear of the Oil Kings in the Central Division standings.
Posted by Oil Drop at 10:33:00 am