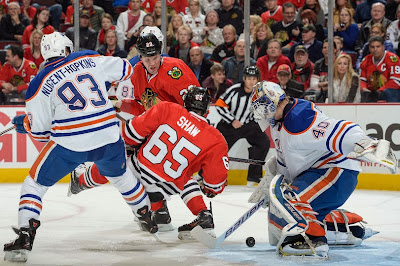 Saying the Edmonton Oilers have had to deal with inconsistent goaltending throughout much of the opening month and a half of the season would be putting it nicely. However, Sunday night wasn't one of those times. Despite a wonderful effort from Devan Dubnyk and a four goal offensive explosion upfront, the Oilers still found away to lose for the eighth time in nine outings, falling 5-4 to the Chicago Blackhawks.

They got goals from the guys who were supposed to score them, as Ryan Nugent-Hopkins, Nail Yakupov, David Perron and  Jordan Eberle all managed to put pucks behind Blackhawks starter Corey Crawford. The power play was effective going two-for-two, as both Perron and Yakupov notched their second goals of the year on the man advantage. Hell they even scored their first shorthanded marker of the season, thanks to Eberle's third period re-direction.

The trio of Eberle, Taylor Hall and Perron all had two point nights while defenceman Philip Larsen had the first multi-point night of his career, picking up three assists. Unfortunately for the the twenty-four year old blueliner, he was also on the ice for all four of Chicago's even strength goals, as he and partner Anton Belov struggled mightily in their own end of the rink.

Sam Gagner had himself another tough night, as he continues to try and find his game since returning from a broken jaw. The Oilers centre failed to even register a shot goal during a second period penalty shot attempt and played a key role in a pair of Hawks goals, one via an absolutely dreadful turnover and the other coming courtesy of his usual nonchalant approach to his defensive zone responsibilities.

While the Oilers did do some good things against the defending Stanley Cup Champs, it was the play of their netminder that gave them a shot at ending their four game road trip on a positive note. Neither side accomplished much of anything over the opening twenty minutes of play but a late goal from Brandon Saad gave the Blackhawks the lead heading into the intermission.

To Edmonton's credit, they would respond with a pair of quick goals to take the lead in period two but it was all Chicago over the final half of the frame. The Hawks came in waves and frankly nearly every single one of their thirteen shots on goal were of the highest quality, as Dallas Eakins' side pretty much left Dubnyk to fend for himself.

He nearly managed to get them into the dressing room with a lead, after making a number of highlight reel stops, but Gagner's inexcusable blind pass deep in the Oilers zone coupled with Larsen losing both his stick and man at virtually the same moment, led directly to Andre Shaw's equalizer with just under three minutes to go in the period.

The two sides would exchanges goals throughout the final twenty minutes and unfortunately for Dubnyk, the only questionable one he allowed to get past him ended up being the game-winner. Duncan Keith's harmless looking point shot somehow found its way past Edmonton #1 goalie, to make it a 5-3with roughly six and a half minutes to play. In his defence, it appeared as though Jeff Petry may have partially screened his netminder on the shot but after tracking the puck as well as he did, the one time he decided not to proved to be rather costly.

Nineteen games into his NHL coaching career and Dallas Eakins is the owner of a dreadful 4-13-2 record. His team is nicely buried in the basement of the Western Conference standings. They current sit four points back of the Calgary Flames, despite having played two more games, and have barely faced any of the true powerhouse teams out West. The Oilers have already allowed an eye-popping 75 goals against on the year, obviously dead last in the NHL, with no one else even insight.

Add to that the fact this team looks as lost in their own end of the rink at the quarter pole of the season, as they did during training camp and one can understand why there are some major concerns with the state of the Edmonton Oilers. While they haven't been anywhere near as bad as their record may indicate, all that really matters are wins and losses. Making the Dallas Eakins Experiment, at least to this point in the season, an unmitigated disaster.
Posted by Oil Drop at 9:16:00 am