Yakupov could use a visit from his former captain 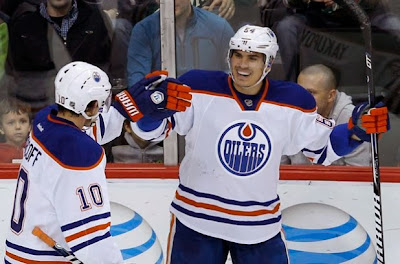 Yesterday afternoon was not a good one for the Edmonton Oilers organization nor was it an especially pleasant one Nail Yakupov. After putting together a fairly effective rookie season during what was an abbreviated 2013 schedule, the youngster has struggled mightily during his sophomore campaign.

Yakupov has registered just four points in seventeen games, been a healthy scratch on two separate occasions and watched his ice-time dwindle down to roughly ten or so minutes a night over the Oilers last four games. With his frustration level at an all-time high and his agent Igor Larionov on the record as having said his client isn't happy with his current situation, the Russian sniper decided to speak his mind on Tuesday morning.

The kid didn't hold back during what was a rather lengthy eight and half minute media scrum, watch here, and had a lot to say. That said, his two biggest concerns were quite obvious. A lack of opportunity and playing for a head coach that doesn't trust him on the ice.

“I don’t see any trust in me now because I play lower and lower minutes. I just want to try and help my team try to win every game … but I don’t have much chance to do that. It’s pretty hard to watch the game from the bench when my teammates are fighting for the puck, fighting for points because I know I can do the same thing.”

After not only listening but also watching the entire exchange, it is obvious the former first overall pick is one "hurtin' unit". Yakupov has never had to deal with anything like this before and unfortunately he didn't feel comfortable enough to talk to his coach or one of his own teammates, before coming out and getting absolutely hammered by the local media.

In my mind, this is a major concern. While most Oilers fans couldn't get former captain Shawn Horcoff out of town quick enough, this sort of situation would not have occurred under his watch. Horcoff played a major role in helping the likes of Jordan Eberle, Taylor Hall, Ryan Nugent-Hopkins and Yakupov adjust to life in the NHL and they all looked up to him for it.

Prior to camp getting under way, Yakupov made it clear he wanted no part of taking his familiar #10 out of respect for his former captain. “He played a lot of years here. Forever ... I want the fans to know Horc for #10”. All the Oilers young stars have had nothing but glowing things to say about their former teammate and Hall took it a step further yesterday, as reported by the Edmonton Journal's Joanne Ireland.

“There were a lot of times in the last four years where Shawn stepped up and said the right thing; really got us back on track. (Andrew Ference) has been a really good captain for us, but it would be nice to have another veteran guy on the team that’s for sure.”

Some may take those comments as a shot at Ference, where as I tend to see as the complete opposite. You need more than one veteran leader on a team in order to be successful in this league and outside of the former Boston Bruins alternate captain, this team doesn't have one. Contrary to what most seem to believe, Ryan Smyth is no longer that guy and hasn't been since returning to the Alberta capital.

The only other guy who came close would have been Ladislav Smid and he was inexplicably not given a letter on his jersey, despite a third of this roster being named as "co-alternates". However, the fact he is currently playing for the Calgary Flames tells me the rookie coach wasn't exactly a big fan of the Czech defenceman.

While Craig MacTavish was dead on with his assessment of a player like Horcoff needing a fresh start, he was mistaken in thinking Ference could help right this ship on his own. This team has been void of a quality veteran leadership group for some time and not addressing it is starting to rear its ugly head...especially with the decision to bring in a "my way or the highway" sort of coach.

That is not to say it was a bad move to hire Dallas Eakins but obviously this dressing room isn't equipped to handle the ramifications of having that type of head coach. Yakupov clearly didn't feel he had anyone to turn to and now the organization and player are left with having to try and pick up the pieces.

It is rather ironic how things sometimes tend to work out. While the Oilers continue to self-implode on an almost daily basis and with no real end in sight, their next opponent on the dance card will be none other than the Dallas Stars. Tonight will mark the return of Shawn Horcoff to the city he called home since the 2000-01 season.

Perhaps before those in attendance take to booing the guy so many of them were dying to rid themselves of, they should instead give him a standing ovation for all the crap he had to endure over the final five or so years he was here. God knows this team could use him now. Funny how you don't really know what you have until it is gone.

Let's hope he still bleeds enough Orange and Blue and finds it in his heart to do this club one more solid and find some time to talk to Nail Yakupov before the Stars leave town. After all, that is really what this whole thing is all about it. Had this management group actually done the right thing and insulated their young core with enough leadership to go around the dressing room, yesterday would have never occurred.

Instead, they now have a potentially explosive situation on their hands and that my friends, is a major indictment on this organization.
Posted by Oil Drop at 9:28:00 am