Make it seven of eight, as Oilers lose in Philly 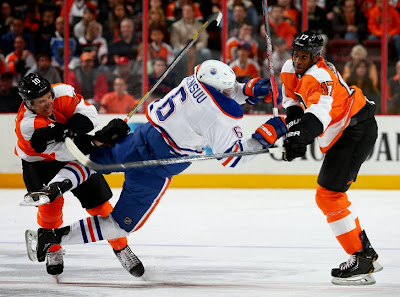 It was an afternoon battle between two of the league's most disappointing teams and one that would finally see the offensively challenged Philadelphia Flyers find their scoring touch. A pair of third period markers from Claude Giroux and Vincent Lecavalier proved to be too much for Dallas Eakins's side to overcome, falling for the seventh time in eight games, this time by a score of  4-2.

Forward David Perron made a successful return to the Oilers lineup after missing the previous four games with a variety of nagging injuries, scoring his third of the year. While Taylor Hall continued to make his presence felt,scoring for the second consecutive game since returning from a knee injury.

Despite allowing four goals against, Devan Dubnyk made a number of key stops to keep his team in it but it was ultimately not enough. Defenceman Anton Belov was assessed a match penalty early in the third period, for an apparent head shot on Giroux, despite video evidence clearly showing the Oilers rearguard nailing the Flyers centre with what was arguably a textbook body check.

Edmonton came out hard out of the gate but from the 7:20 mark on, the very moment Belov was whistled down for interference, Philadelphia took this one over. While the Oilers did manage to kill off the man advantage, the Flyers would hit the scoresheet shortly there after, as Jay Rosehill tipped home his first of the season at 11:56.

Scott Hartnell would double the lead before the period was out, snapping just his second of the year past Dubnyk, as the Oilers were once again caught running around in their own end of the rink. For a team that had scored just 22 times over their first 15 contests, Philly could not have asked for a better opening twenty minutes of  play.

The Flyers continued to pour it on early in period two but Dubnyk was up to the challenge, making a handful of big saves to keep it at a two goal deficit. He would be rewarded for his work before the period was out, as Perron would net a late power play marker, courtesy of a great play from Ales Hemsky, to cut the lead to one heading into the intermission.

With the two sides playing four aside, Giroux would finally break his season long scoring drought, using an ill-advised drop pass from Hemsky to his advantage, wiring his first of the year past a partially screened Dubnyk high to the blockerside. While one could argue that perhaps the Oilers starting tender would possibly like to have had that one back, pretty tough to not chalk it up to a helluva shot from Giroux.

Edmonton would need just two minutes to get that one back, as Hall slipped a loose puck behind Mason for his team leading fifth of season, after Sam Gagner's attempted cross-ice pass to a streaking Hemsky, ricocheted off a skate and directly to the Oilers #4. That would be as close as Edmonton would get.

Lecavalier put this one to bed with just over three minutes to go, zipping home a bad angled shot under the crossbar and over a down and out Dubnyk to make it 4-2, mere seconds after Edmonton killed off Gagner's poorly timed boarding penalty.

The game marked the Oilers first time out since trading away defenceman Ladislav Smid to the Calgary Flames and signing free agent netminder Ilya Bryzgalov on Friday afternoon. While Bryzgalov will be headed to Oklahoma City for some action with the Barons before making his debut in Oilers silks,  Edmonton sorely missed not having Smid on their backend against a much bigger and physical team like the Flyers.

While general manager Craig MacTavish may have needed to free up cap space to bring the former Phoenix  Coyotes standout on board to shore up his goaltending, the need to replace the veteran Czech blueliner is painfully obvious. After scoring in his first two NHL games, Taylor Fedun struggled mightily on the afternoon, while both Andrew Ference and Nick Schultz had their challenges throughout the entire sixty minutes.

Edmonton now sit twenty-ninth in the league standings with  a 4-12-2 record, only the Buffalo Sabres have been worse...posting a 3-15-1 mark. They will closeout their four game road trip on Sunday night in Chicago, where they will be facing a Blackhawks side that have gone 7-1-2 over their last ten games and are coming off an impressive 5-2 victory over the Dallas Stars on Saturday night in Texas.

The Hawks will likely use Nikolai Khabibulin in goal against his former mates, as Corey Crawford picked up the win against the Stars and has already seen action in fifteen of Chicago's first 17 games. Khabibulin has struggled to start the year but don't be surprised to see him play at his very best, whatever that might be for a 40 year old puckstopper, against the Oilers.

One would think Eakins will come back with Dubnyk, despite the back-to-back games, as Jason LaBarbera will most likely be nailed to the bench until Bryzgalov is deemed ready to see action. If nothing else, let's hope we see the usual entertaining Chicago vs Edmonton match up, as the two sides generally tend to bring out both the best and worst parts of each others game to the forefront.
Posted by Oil Drop at 10:29:00 am