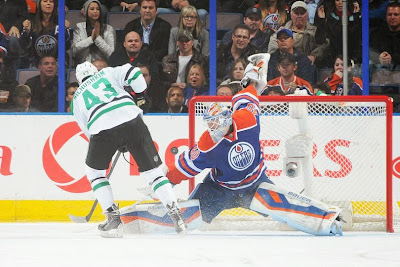 Last night must have been severe case of déjà vu for Dallas Stars centre Shawn Horcoff. Outside of Ales Hemsky and die-hard Edmonton Oilers fans everywhere, no one has seen this song and dance more often than the former captain. In what was a carbon copy of nearly every game on Rexall Place ice this season, Dallas Eakins side came out with their typical flat/lifeless performance, dropping a 3-0 decision to the Stars.

Rich Peverley scored what turned out to be the eventual game-winner midway through the second period, as the Oilers were shutout for the third consecutive time on home-ice. They currently set with a league worst 1-6 mark at home, scoring a grand total of two goals in their past five outings at Rexall Place.

Devan Dubnyk was solid in between the pipes stopping 23 of the 24 shots fired his way but as per usual, the guy down at the other end of the rink was a little bit better. Kari Lehtonen continued his dominance over the Oilers, stopping 22 shots in earning his first shutout of the season.

Outside of their season opener against the Winnipeg Jets, this team has been unable to set the tone and/or push the pace on home ice this year and last night was no different. Very much like their 4-0 drubbing at the hands of the Toronto Maple Leafs on October 29th, Edmonton came out with a decent first period against the Stars but decent just isn't good enough.

While Lehtonen absolutely stoned Jordan Eberle with a brilliant glove stop in the opening period of play and Sam Gagner hit the post, you never once got the sense of Dallas being on their heels. Even during an early second period two-man-advantage, all they could muster up was a long-ranged Ryan Nugent-Hopkins shot glancing off the post, that had it actually hit the net, would have easily been stopped by the Stars netminder.

As usual, the effort wasn't bad but simply not good enough from a National Hockey League squad who is playing on their home sheet of ice. People have been saying it for years and it still holds true to this day. Edmonton is far too easy a team to play against. As a collective group they have the offensive firepower necessary to dictate terms but are clearly missing that internal drive from the vast majority of their core players to get the job done.

You can talk all you want about the talent this team has on their roster but if that fire to want to win is missing, it doesn't do anyone any good. Add to that the fact this team has no other dimension and their dreadful home record should surprise no one. It's nothing new. It has been going on for four consecutive seasons and quite frankly, I am not sure they have the horses in place to change it.

With the San Jose Sharks up next, this team will be hard-pressed to not get obliterated on Friday night against Joe Thornton and company. They will follow that up, the very next night, with an appearance on Hockey Night in Canada against the Calgary Flames at the Scotiabank Saddledome. The Oilers have now gone a 1-8-1 over their last 10 games and should they get to Sunday morning sporting say a 1-10-1 record over their last twelve, something is going to give. I have no idea what it will be but something will be coming.
Posted by Oil Drop at 8:40:00 am