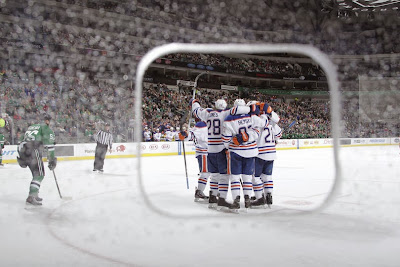 In a season in which the Edmonton Oilers have lost the goaltending battle on most nights, the duo of Ilya Bryzgalov and Devan Dubnyk combined to help propel the Oilers to a come from behind 3-2 victory over the Dallas Stars. Shootout goals from Jordan Eberle and David Perron proved to be the difference, as the Oilers closed out their three game road trip with their fifth win in seven tries.

Bryzgalov was knocked out of action late in the second period, courtesy of a well placed shoulder to the head from Stars forward Ryan Garbutt, after stopping twenty-eight of twenty-nine shots in just under thirty-seven minutes of action.

For the second straight game, Dubnyk was called upon to come in off the bench and the big man responded with a trio of monster saves in the third period, giving his team a shot to earn the comeback win. The Oilers #40 stopped fifteen of the sixteen pucks fired his way and two of three in the shootout, earning his seventh win on the season.

As has been the case on far too many occasions of late, Edmonton’s power play let them down early on and Dallas took full advantage of the Oilers continual hiccups on the man advantage. The Stars would carry the play for much of the opening forty minutes but Bryzgalov kept his team alive in a game they, frankly, had no right even being in.

Ironically it would be Garbutt who would be the lone skater to get a puck behind the Oilers starting netminder, converting on a shorthanded break after he and former Oiler Shawn Horcoff forced defenceman Denis Grebeshkov into an ill-timed turnover.

While the Russian blueliner’s miscue proved rather costly, he was effectively left to fend for himself after receiving not an ounce of support from any of his forwards on the play. Dallas would keep coming and while they were unable to get another puck past Bryzgalov, Garbutt did manage to knock him out of commission before the period was out.

Upon losing the only piece of the puzzle that was keeping them in the game, Edmonton looked to be ready to mail this one in. Lucky from them, a heads play from Ryan Jones in the final minute of the second period would lead directly to Ales Hemsky’s last second equalizer and give the Oilers hope heading into the intermission.

Garbutt would continue his eventful evening early in period three, ripping home his second of night, as Jeff Petry never picked up the trailer on what started out as a seemingly harmless one-on-two break for the Stars. The most puzzling part of the entire sequence, was watching Sam Gagner gliding back into his zone and not having the wherewithal to let Petry know about the trailer, despite having watched the entire play evolve right in front of him.

There was still plenty of time to get that one back, 16:15 to be exact, but things weren’t looking good. That all changed when Dubnyk came up with a trio of spectacular stops when his team needed it most.

He first robbed Cody Eakin with a timely block midway through the period to keep it a one-goal game but saved his best work for later in the frame, stoning Horcoff and rookie Valeri Nichushkin on a bang-bang play with a pair of ridiculous pad saves.

Edmonton would be repay their netminder for his handy work mere moments later, as Andrew Ference’s point blast found its way past a partially screened Kari Lehtonen with just over five minutes to go. It wasn’t the greatest of goals for the Stars #1 to give up, especially so late in the game, but Dallas Eakins’ crew used the miscue to their advantage.

The Oilers came in waves over the final five minutes of play and throughout the extra session but the Finnish backstop was doing his very best to atone for his earlier blunder, making a number of highlight reel stops to get this one to the shootout. Unfortunately for him, he had no answer for the Eberle-Perron duo during the skills competition portion of the evening.

Despite having won five of their last seven, Edmonton still find themselves in the basement of the Western Conference standings but have finally climbed to within two points of the thirteenth place Calgary Flames. However, the win did allow them move past the Florida Panthers into twenty-eighth spot in the overall league standings.

It may not seem like much but at this stage of the game, it’s about moving forward in a positive frame of mind and winning games generally makes that far easier to accomplish.
Posted by Oil Drop at 7:03:00 am