Anyone else up for an 82 game road trip? 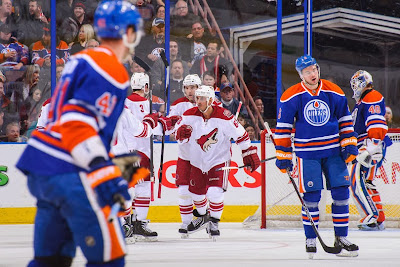 Last night’s 6-2 loss to the Phoenix Coyotes pretty much summed up the Edmonton Oilers 2013-14 season. As per usual, they put in a decent effort on home ice but yet again, played with zero energy or urgency in their game.

Devan Dubnyk was at his inconsistent best, allowing three iffy goals against and one in particular that changed the entire complexion of the game. Outside of David Perron, who scored both goals and was a complete pain in the ass for the Coyotes to deal with for the entire sixty minutes, Dallas Eakins had far too many passengers on the night.

While the top line of Jordan Eberle, Taylor Hall and Ryan Nugent-Hopkins created a number scoring chances, at some point it has to start showing up on the scoreboard.

The Oilers did manage to put together a decent opening twenty minutes of play, albeit playing their typical flat and energy-less style of hockey. Unfortunately for them, Phoenix would strike for a pair of goals in fifty-eight seconds to grab a two goal lead eight minutes into period two, one courtesy of a blown assignment from Jeff Petry and the other just a terrible goal against Dubnyk.

Edmonton would cut the lead to one with a last minute power play goal from Perron, his eleventh of the season and sixth on the man advantage, putting them in a position to go out and take this one with a strong third period. That is what most good teams tend to do in their own barn. Problem being, Edmonton isn’t a good team and they are by far and away the worst team in the NHL when it comes to winning games on home-ice.

Since the start of the 2010-11 campaign, the Oilers have gone 43-59-16 over their last 118 appearances at Rexall Place. The only team that has come close to being as bad as this one, has been the New York Islanders and their 49-53-20 mark. There is one word that best describes this team and that word is awful.

Expecting this group, as it is currently structured, to do anything other than what they have been doing for the last number of years, is nothing more than wishful thinking. Phoenix needed all of ten minutes to score three times and put this one out of reach. It’s the same song and dance.

An ill-timed turnover from Justin Schultz behind his own net led directly to Mike Ribeiro’s 4-2 goal, as Sam Gagner decided to make a bad situation even worse, peeling out of the slot and leaving it completely unattended for Ribeiro to fire home his eighth of the season. Keith Yandle would put this one to bed with a brilliant end-to-end rush, making Petry look pylon-like before beating Dubnyk high to the gloveside, on a shot the big man simply has to have. Forty-five seconds later, the combination of just a dreadful rebound from the Oilers starting tender and some shotty defending from Anton Belov, would lead to directly to David Moss making it a 6-2 final.

Make no mistake, Dubnyk was bad in between the pipe but he was far from the only one. The mistakes were plentiful, from the goal crease out, but until this team makes a concerted effort to try and actually correct those problems, nothing is going to change. Does a team need their goalie to make the odd save? They most certainly do but helping your netminder out from time to time doesn’t hurt.

There are going to be games like Sunday’s tilt in Dallas, when Dubnyk and Ilya Bryzgalov combined to give the Oilers every single opportunity to come from behind and earn two points they had no right getting. That said, you can’t expect that from your goalie every single game. It’s not realistic for teams that have elite goaltending, never mind a team like the Oilers, where that is clearly not the case.

These players can keep talking about being sick and tired of losing but until we see it on the ice, those are nothing more than words. Edmonton may be able to eke out wins against the Florida Panthers or Calgary Flames of the world but good luck at accomplishing that against any of the league’s better teams.
Posted by Oil Drop at 10:29:00 am