Hall is starting to ramp things up 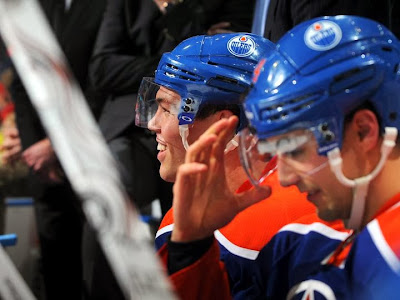 If only the Edmonton Oilers could find a way to play the Columbus Blue Jackets or Colorado Avalanche on a somewhat regular basis on home ice, all would be good in Oil Country.

Having already destroyed the Blue Jackets by a score of 7-0 during their sole visit to Rexall Place this seasons, Edmonton continued their domination against the Avs on Thursday night, posting an 8-2 victory against what was the NHL’s top road team.

Taylor Hall led the onslaught upfront, recording his fourth career hat-trick, while Ryan Smyth turned back the clock with a three point effort. Mark Arcobello, Jordan Eberle, Ales Hemsky, and David Perron all chipped in with two points, as the Oilers had eleven different skaters hit the scoresheet.

It certainly did not take Hall long to get this one started, scoring at the 3:44 mark on a clear-cut breakaway on starter Semyon Varlamov. Just over three minutes later, Edmonton would hand the Avalanche a golden opportunity to get back on level terms, as both Ryan Jones and Corey Potter made their way to penalty box a mere forty-six seconds apart.

Colorado could not take advantage and Edmonton would make them pay before the period was out, when they were handed a two man advantage of their own. Hall would one-time his second of the period and ninth of the season and Hemsky would make it three goals on eight shots, sliding home his sixth of the year all of fifteen seconds later.

In a blink of an eye, what was a relatively even period turned into a typical Oilers vs Avs game at Rexall Place. Give Colorado credit, they fought back to cut the deficit to one, as Nick Holden and PA Parenteau beat Devan Dubnyk inside the opening ten minutes of period two. You could feel the tide turning but Dubnyk stood tall in between the pipes and the Oilers would payback their netminder for his timely work.

As has been the case for much of the season, Edmonton would use yet another four-on-four situation to their advantage, following coincidental penalties to Hall and Parenteau. David Perron stayed red-hot, beating Varlamov with a perfect shot on a two-on-one break, after using Jordan Eberle as decoy to score his twelfth of the season.

Edmonton would explode over the final twenty minutes, to make this one an absolute laugher. Goals from Arcobello, Eberle, Gagner and Hall turned this one into a blow out. Despite the offensive explosion, Luke Gazdic managed to bring the fans to their feet during a very one-sided tilt with Patrick Bordeleau, after the Avalanche tough guy took a healthy run at Ryan Jones during the opening minutes of the period.

From start to finish, it was a perfect night for the guys in Orange and Blue. That said, with the Colorado Avalanche not set to return to the Alberta capital until the final week of the season, it will be up to Dallas Eakins’ crew to find their “A” game against every other opponent that finds their way into Rexall Place. God knows these fans deserve it.
Posted by Oil Drop at 9:52:00 am