Jeff Petry is not the problem 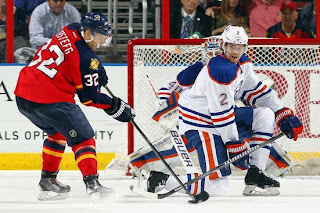 Outside of probably netminder Devan Dubnyk, no player currently on the Edmonton Oilers roster is a more polarizing figure  among fans than defenceman Jeff Petry. While he may not be everyone’s cup of tea, there is no questioning the fact Petry is this team’s best blueliner and by a fairly wide margin.


Unfortunately for both him and the team, the former 2006 second round pick has had more than a few hiccups during the opening third of the 2013-14 campaign. For portions of the last three years, he has been asked to take on top pairing status, despite not being ready for the role, and it is starting to come back and bite the organization in the behind.

What most people tend to forget when it comes to Mr. Petry, is he in the midst of playing just his fourth season in the NHL and is only taking his second crack at seeing full-time duty over an 82 game schedule. The former collegiate standout dressed for just 35 games during his rookie campaign in 2010-11 and looked out of his element more often than not.

It was much of the same to start off year number two, as he yo-yo’d his way between Edmonton and Oklahoma City over the opening month of the season. That all changed in early January, as he was handed the opportunity to play top pairing minutes along Ladisiav Smid, following an injury to former Oiler Tom Gilbert.

Petry was lights out the rest of that season and his improved play ultimately paved the way for the organization to send Gilbert to the Minnesota Wild in exchange for veteran Nick Schultz at the NHL Trade Deadline. From that moment on, the young American rearguard has generally been used in Edmonton’s top pairing with Smid, until the latter’s departure from the Alberta capital in early November.

Not surprisingly, the Oilers #2 has seen his play become far more erratic since his regular partner exited town. While they were clearly miscast as a “top pairing”, on this team they were the two most qualified guys to be used in such a role. Instead of looking for an upgrade, general manager Craig MacTavish decided to go a different direction, shipping the rugged Czech defender to the Calgary Flames for a couple of prospects.

With that being case, the heat has gone up a notch or two for Petry to deliver and he is starting to show signs of cracking. His overall game has suffered badly over the last ten or so games but in all honesty, should any of us really be surprised?  If you are putting a player into a situation they are likely to struggle in, would expecting anything other than such a result be nothing more than wishful thinking?

The only other Oilers defencemen remotely capable of coming close to handling top pairing minutes would be Justin Schultz and Andrew Ference. With Schultz being even younger than Petry and also a right shot defenceman, he’s not an option. Leaving the 34 year old veteran who was brought on board to help fill out what has been the weakest blueline in the NHL for a number of years, as the only true option.

So again, I ask the question. Should we really be surprised Petry is struggling as much as he has of late? I am not in the kid’s head, so there is no way to know for sure, but one can only imagine the amount of heat he is currently feeling. Not only does he have to continue to try and improve as a player but now he has to carry a D core that can’t even produce a solid option for him to play with, in a role that even he isn’t ready for.

As currently structured, this blueline is made up of two guys, Petry and Schultz, who should be playing top four minutes, another in Ference who is best suited as a #5 but can play as a #4 in a pinch and the rest being no better than bottom pairing/ depth players, Sorry but that is not an NHL caliber defence…not even close.

Add to that a forward group which, at best, are defensively challenged and goaltending that has been inconsistent to downright dreadful since Game #1 and one can quite easily understand why Petry is likely feeling the pressure.

To date, Jeff Petry has played exactly 185 games in the National Hockey League and in my opinion, has already solidified himself as a legitimate second pairing defencemen on almost any team in the league. Think about that for second. In what amounts to just over two seasons worth of games, this guy has gone from a tweener in his early twenties to a solid NHL blueliner in his mid-twenties...and did so on the worst team in the NHL.

Instead of having head coach Dallas Eakins come out and publicly call out the play of his team's top defender, as he did following Tuesday's loss to the Phoenix Coyotes, perhaps the organization should set their focus on bringing in some help for the kid...before they ruin what he could potentially become.

As the title of this piece suggests, I am quite confident in saying Jeff Petry is not what ails the Edmonton Oilers. If anything, perhaps it is the Edmonton Oilers who are making life far more difficult on Jeff Petry than it needs to be. Something Oilers fans should keep in mind, before they take to slamming him for his supposed poor play.