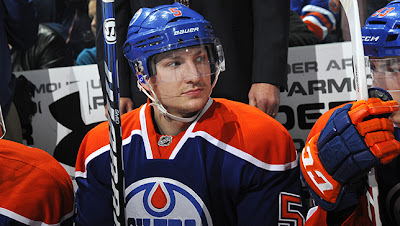 Saturday night’s 4-3 loss to the Philadelphia Flyers marked the midway point of the Edmonton Oilers 2013-14 campaign. Forty-one games are now in the books and the Oilers sit in the basement of the Western Conference with a 13-24-4 record, good enough for 29th spot in the NHL’s overall standings.

Not much has gone right for Dallas Eakins and company over the opening three months of the season and not surprisingly, the negatives have heavily outweighed the positives. While the likes of Boyd Gordon, Taylor Hall, Ryan Nugent-Hopkins and David Perron have put together fairly productive starts to their year, players such as Sam Gagner and Nail Yakupov have been downright awful.

Overall, it has been a first half to forget for an organization that was supposedly ready to take their first steps back towards respectability. With that not been the case, one can’t help but look back over the past ninety or so days and see where the Oilers got it right and where they completely missed the boat.

Best Move - Signing Ilya Bryzgalov
There is no question Craig MacTavish had more than a view concerns about Devan Dubnyk being his #1 guy heading into the season. He kicked some tires on possibly bringing in a replacement for the former fourteenth overall pick but ultimately decided to give the twenty-seven year old a legitimate shot at being an NHL starter. Unfortunately that decision would come back to haunt this club.

The tandem of Dubnyk and Jason LaBarbera were so bad to start the year that MacT was forced into revisiting one of those “tire kicking” options, when he decided to bring Ilya Bryzgalov on board. While signing the former Philadelphia Flyers netminder for the remainder of the season was a low risk move, the potential upside was too hard to pass up.

Frankly, it was a no lose situation for the Oilers rookie GM. If Bryzglov stunk the joint out, so be it. With the way Dubnyk and LaBarbera were playing, it was well worth the risk. At the opposite end of the spectrum, if the former Vezina Trophy nominee could regain the form he showed during his time with the Phoenix Coyotes, Edmonton might have just solved their goaltending woes for the next couple of years.

Having started just eight times since making his Oilers debut in late November, the jury is still out on the thirty-three year old vet. That said, he has been nothing but solid since arriving to the Alberta capital and has given his team a chance to win nearly every time out, Not surprisingly, Edmonton has posted a respectable 3-4-1 mark in the games he has started. Coincidence? I can’t see how it is.

Worst Move – Trading away Ladislav Smid
Everyone knew there would be more growing pains when it came to the Edmonton Oilers blueline in 2013-14. With Justin Schultz having played all of half of a season at the NHL level and the likes of Anton Belov and Denis Grebeshkov coming over from the KHL, no one should have been expecting miracles from the Oilers D. That said, this was by far and away the best collection of talent this organization had put together in some time on the backend.

As a collective unit, they struggled right out of the gate. The combination of trying to adapt to Dallas Eakins defensive scheme, while overcoming ECHL level goaltending, proved to be a little much for this group. However, as the month of October moved along, they were slowly starting to show signs of improvement, as guys were beginning to understand the system.

Unfortunately, that was right around the time Craig MacTavish decided to give his blueline zero chance of competing for the rest of the season. On the heels of a tough 4-2 road loss to the Tampa Bay Lightning, MacT sent defenceman Ladislav Smid to the Calgary Flames in exchange for Roman Horak and Laurent Brossoit.

The decision to move the twenty-seven year old for nothing more than a couple of “what if’s” made no sense at the time of the trade and nearly two months later, it makes even less. The fact this organization decided to part was with a legitimate top four/five defenceman, on a roster that has nothing resembling a top pairing guy, is mind boggling. How anyone in their right mind feltt removing Smid from the equation to elevate the likes Belov and Philip Larsen was a good idea, is frankly laughable.

The moment Dallas Eakins announced almost a third of his roster as alternate captians and Smid was not among them, you knew his days in Edmonton were all but numbered. The former first round pick of the Anaheim Ducks did struggle to start the year but as mentioned, he was not alone. If anything, his game had started to show signs of improvement but it apparently wasn’t good enough for the head coach or general manager.

Not surprisingly, the move has effected Jeff Petry most and not in a positive manner. With Smid no longer In the picture, Petry has struggled mightily to find any sort of chemistry with the Oilers remaining blueliners. Why you ask? It’s actually quite simple…they aren’t good enough!!!

Don’t get me wrong, Smid has his limitations as a player but considering what the other options were, there was really no choice to be made. Unless the plan was to ship him out and bring in an upgrade, which has yet to happen, the move was nothing more than a salary dump by a last place team.