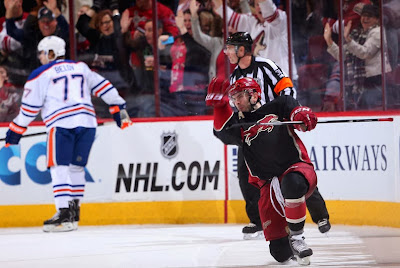 Should any of us have really been surprised? Watching the Edmonton Oilers blow another late third period lead and eventually drop a 4-3 overtime decision to the Phoenix Coyotes seemed to be the perfect way for this group to end what has been a rather tumultuous 2013 calendar year.

Taylor Hall was at his dominating best on Tuesday evening, picking up three assists in what is quickly becoming a standard performance from the 2010 first overall pick. As good as Hall was, Coyotes blueliner Keith Yandle was every bit as impressive as the Oilers young star forward, posting a three point night of his own…including the OT winner.

Ilya Bryzgalov was simply outstanding in defeat, single handedly keeping his team alive during an opening twenty minutes in which Phoenix was in complete control. The veteran netminder was called upon to make a number of huge stops throughout the night but was victimized for a late third period equalizer for the second straight outing…both coming against his former clubs.

As good as Bryzgalov was, the veteran tender was unable to shut the door at crunch time and as expected, received next to no support from a group that continues to look overwhelmed when it comes to closing out hockey games. That said, as previously mentioned, should we really be expecting anything but continual chaos from this current edition of the Orange and Blue?

While Phoenix outshot Dallas Eakins’ side by a rather hefty 45-25 margin, Edmonton was much better over the final forty minutes of play. They generated their fair share of scoring chances and took advantage of yet another off night from goaltender Mike Smith but were unable to solve his backup Thomas Greiss.

Bryzgalov was kept busy from start to finish and was frankly unfortunate on Tim Kennedy’s momentum changing bank shot, which turned a two goal deficit into a 3-2 game. Ninety-nine times out of hundred, Kennedy’s attempt on goal would have simply hit the side of the net and ricocheted into the corner. However, on this night the puck would bounce in the opposite direction.

To his credit, the former Coyote tender was fantastic over the following twenty-six or so minutes and with less than ninety seconds to go, looked to be headed for his third win in Oilers silks. Unfortunately, Edmonton would be at their “train-wreck” best to close out regulation, as they missed assignments all over the ice, leading to Mikkel Boedker equalizer with just over a minute to go.

Disappointing? Of course but this game was still there for the taking…especially after Derek Morris was whistled down for hooking down Jordan Eberle, all of twenty-nine seconds into overtime. Regrettably, the Oilers power play came up empty when it mattered most…bringing into question Eakins’ decision to scratch Nail Yakupov in favour of former Calgary Flames farmhand Roman Horak.

Despite their inability to produce on the man advantage, this one had shootout written all over it…at least until Edmonton self-destructed in the dying seconds of the extra session. Eberle would kick off the comedy of errors with roughly fourteen seconds to go, coughing up the puck just inside the Coyotes blueline, after being easily out-muscled along the sideboards by Yandle.

To make matters worse, Jeff Petry decided to step up at that very moment and had the puck bounce off his skate and back to the Coyotes #3, who was than off to the races. Despite both Eberle and Petry making glaring mistakes, defenceman Anton Belov was in perfect position to cut Yandle off but instead decided to glide alongside the talented blueliner.

With all of eight seconds left on the clock, all Belov had to do was simply bring Yandle to the ice and allow time to expiry. One would think it would be fairly straight forward but apparently that was not the case for the twenty-seven year old NHL rookie. Why make the obvious play when you could make life for your goaltender difficult.

Perhaps the fact Belov was in the midst of taking a minute and half long shift had something to do with it, something which obviously didn’t sit well with his head coach. In the end Bryzgalov ran out of miracles and the Edmonton Oilers finished off 2013 in the fashion you might expect…skating off the ice with their heads down and wondering what the hell just happened.

For everyone’s sake, let us hope this ship starts to turn around in 2014, as this act has become real difficult to watch. It certainly would be nice to see things start going in the right direction but the smart money would be on expecting more of the same until the end of the current 2013-14 campaign.
Posted by Oil Drop at 2:48:00 pm