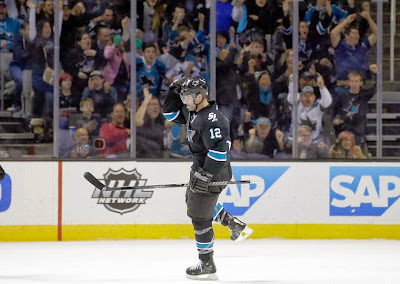 Another game against a Western Conference powerhouse was met with yet another ass-whipping for the Edmonton Oilers. While the final score may have read 5-1 for the San Jose Sharks, it was a rather flattering score line for Dallas Eakins’ side.

As has been the case in nearly every game this team has played against an upper echelon opponent, the Oilers were thoroughly outclassed from start to finish. While it may have looked promising after an opening ten minute stretch that saw Edmonton kill off a pair of San Jose power play opportunities and create a couple of quality scoring chances, courtesy of Sam Gagner, it surely didn’t last much longer than that.

Before the period was out, the Sharks would click for a pair of goals in just forty-nine seconds, the first coming off the stick of Brent Burns and the second from Oilers-killer Patrick Marleau, which pretty much put this one to bed. San Jose imposed their will and there was nothing Edmonton could do about it.

They were out shot 17-7 in the first and were fortunate to only be down by two, as Devan Dubnyk was solid over the opening twenty but would likely love to have Marleau’s long ranged shot back. That said, the Oilers were still in it after one but that all changed by the 8:45 mark of the middle stanza, as goals from Bracken Kearns and Logan Couture turned this one into nothing more than a laugher.

Edmonton’s top line of Taylor Hall, Ryan Nugent-Hopkins and David Perron were downright awful, going a combined -9 on the night, and found themselves stapled to the bench for the final 12:42 of the second period. The benching came after the trio decided to take a two minute shift that would ultimately come to an end following Kearns third goal of the campaign. Can you say ugly?

Outside of Nail Yakupov scoring late in the second period to cut the lead to 4-1, which came on the heels of the youngster’s one game banishment to the press box on New Year’s Eve in Phoenix, the night was a complete and utter disaster. San Jose looked to be toying with the Oilers for much of the sixty minutes and the Western Conference cellar dwellers seemed as though they wanted absolutely no part of paying the necessary price to stay in this one.

While there is no shame in losing to a team as good as the Sharks, at what point does a team stand up for themselves and say enough already? For the last number of games, the Oilers have been badly outplayed but thanks to some timely goals and fantastic goaltending, they managed to grab points from each of their previous four outings. There was absolutely zero chance of them making it five straight with at least a point, as the Orange and Blue looked as though they didn’t even belong out on the same ice surface and Jumbo Joe Thornton and his band of men.

Quite literally, it was men against boys and the gap between these two teams seems to only be widening. Make no mistake, San Jose is a far superior side but to be routinely pumped to the degree the Oilers have by the league’s best is not a good sign. Not too long ago, this team was actually capable of pushing the best of the best when they brought their “A” game.

Whereas now it seems as though the fear of facing Edmonton's talented “young guns” is nothing more than a myth the local media and fan base continue to reference back to. Outside of Todd Richards and Patrick Roy, who coach teams the Oilers seemingly destroy at will on home ice, you would probably be hard-pressed to find another coach that truly fears Edmonton’s talented core upfront.

At the moment, they are nothing more than what a 13-25-5 record might suggest. This is a very bad hockey club. That may not be what the masses or Oilers management want to hear but it is the reality of the situation. That is something these players and organization have yet to grasp. Until you accept what you truly are, nothing will change.

Looking at the Oilers remaining schedule, expecting this team to turn it around and even play close to .500 hockey would be nothing more than a pipe dream. This team is nowhere near ready for prime time but they certainly should be. At no point should losing become an acceptable outcome and despite what these players might say publicly, their in game performance tells us something completely different.

They must get to the point where they actually do not like losing. Problem is, at the moment, there appears to be very few who have reached that point. They sure like to say the right things prior to and after games but it is out on that sheet of ice where we have yet to see this collection of talent go out and do what’s expected of them.

Until that happens, not much will change and the lopsided losses will continue to pile up.
Posted by Oil Drop at 9:53:00 am