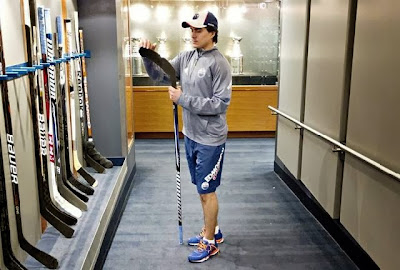 As far as rookie seasons go Nail Yakupov managed to put together a fairly productive one during what was an abbreviated 48 game schedule in 2013. The former first overall pick not only led all rookies in both goals and points but was also tops among all Edmonton Oilers with seventeen goals.

After finishing off last season in grand style, scoring six times over the Oilers final three games, much was expected from the young Russian sniper during his first full National Hockey League campaign. Unfortunately, he currently finds himself in the midst of one of the worst sophomore slumps in recent memory. Thirty-nine games into his second season and twenty year old has collected all of fourteen points, while accumulating an NHL worst -25 plus/minus rating.

To make matters worse, his tendency to cough of the puck coupled with his struggles in the defensive zone has made him a liability in the eyes of Dallas Eakins. With that being the case, the kid has found himself stuck on the Oilers fourth line of late and is coming off a stretch of four straight games in which he has seen less than ten minutes of ice-time.

While Eakins did scratch Yakupov for a pair of games earlier in the season, in hopes of hitting the "reset button" on the former Sarina Sting standout's season, this latest demotion is far more difficult to stomach and understand. No one can blame the Oilers rookie head coach for wanting to turn the tide on what has been an absolutely abysmal debut behind an NHL bench but at what cost?

This season has been done for some time and Edmonton simply do not have the horses to compete for a playoff spot. With the situation being what it is, is employing the "tough love" approach with #64 really worth the risk? If Eakins isn't comfortable using the young ter in a top nine role, can’t he and Craig MacTavish come up with a better alternative than having him play a bit part for the last place team in the Western Conference?

Perhaps the time has come for the Oilers GM to step in and set up a meeting with his head coach, the player and agent Igor Larionov. Maybe sending Yakupov down to the American Hockey League for a ten day "conditioning stint" wouldn’t be such an awful idea. In fact, it could do the kid a world of good.

Obviously, this would have to be done in such a manner that both Larionov and Yakupov would see the benefit of him going down and playing major minutes. While he still has much to learn as an NHL player, the biggest issue with Nail at the moment is his confidence. Very much like the Oilers power play, the young Russian has lost is mojo and he needs to relocate it...no matter how he has to go about doing it.

If the discussion were to revolve around Larionov's client going down to OKC to work on certain aspects of his game and making a real effort to start using his teammates on a more regular basis, maybe the two of them seriously consider it. While it may not be the NHL, it sure beats sitting on the bench for fifty minutes a night.

Looking at the Oklahoma City Barons upcoming schedule, they play back-to-back games on January 3rd and 4th, followed by games on the 8th, 10th and 11th. That's five games in nine days and with Edmonton's next game being on New Year's Eve against the Phoenix Coyotes, there would be plenty of time for Yakupov to meet up with the Barons prior to their game against the San Antonio Rampage on Friday night.

Is it an ideal situation? Probably not but considering how things have gone for Nail Yakupov and the Edmonton Oilers this season, perhaps getting him out of the spotlight of playing with the big club for a week and half wouldn't be such a bad idea. God knows the current game plan isn't working too well. If the plan is to have Yakupov try and improve his overall game, at some point, he will need to get out onto the ice and play with other skilled players.

Continuing down the path they are currently on, as if nothing is wrong, would be a major mistake on the part of this organization. Keep it up and this thing will likely blow up in their face...which is something they can simply ill afford to have happen.