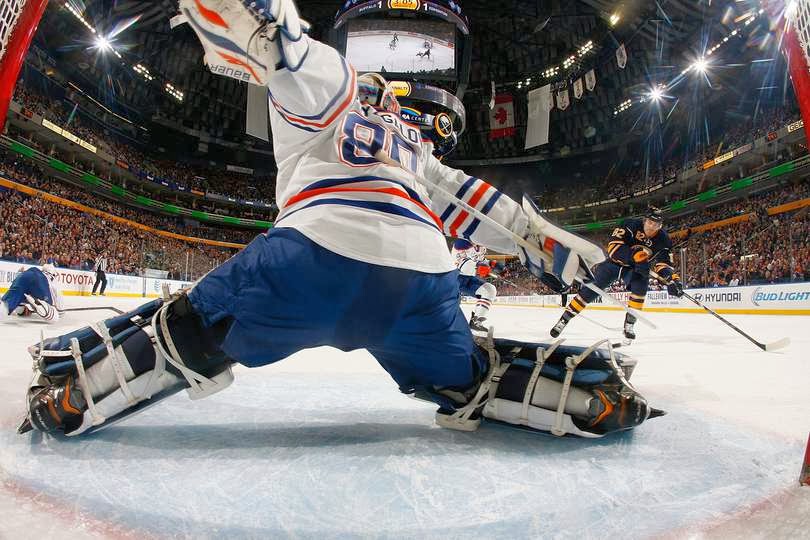 It was far from a masterpiece and at times, it was frankly difficult to watch but in the end, the Edmonton Oilers 3-2 win over the Buffalo Sabres was two points Dallas Eakins crew had no business earning. After watching Ben Scrivens be peppered with 100 shots over his last two starts, the Oilers clearly didn’t want Ilya Bryzgalov to feel left out.

To the surprise of many, the veteran netminder returned to the crease on Monday night and was simply outstanding in leading Edmonton to their fourth win in five tries.Bryzgalov stopped 42 shots to earn the win, while Sabres backup goalie Jhonas Enroth looked uncomfortable from start to finish in falling to a dreadful 1-11 mark on the season.

After going scoreless against the Boston Bruins on Saturday afternoon, the Oilers did manage to score three goals but they were far from impressive. Jeff Petry opened the scoring all of thirty-two seconds in, as the much maligned blueliner slipped his fourth of the season past Enroth, on a shot the Sabres starter should have had. However, instead of using the early break to their advantage, it had the complete opposite effect on the Western Conference cellar dwellers.

Steve Ott would bang home his ninth of the year with Buffalo on the power play to tie things up at one and before the period the was out, the Oilers managed to do what they do best on the man advantage...allowing their league worst tenth shorthanded goal against.

This one was squarely on Jordan Ebelre, who turned over the puck at the Sabres blueline seconds after gaining the zone and leaving his fellow mates in a near impossible situation. Drew Stafford made the most of what was Buffalo’s fourth odd man rush of the period and third against the Oilers once mighty power play, beating Bryzgalov high to the glove side with fifty-six seconds left on the clock.

From that point on, it was all Buffalo but thankfully Mr. Eakins’ decision to start Bryzgalov paid off in spades. While Edmonton was thoroughly outplayed by the worst team in the league, the man wearing the #80 on his back was in to pform. If not for an absolutely gorgeous goal from Justin Schultz late in the frame, which was coupled with a beautiful feed from David Perron, the Oilers would have been trailing heading into the second intermission.

Through forty minutes they should have felt fortunate to be even at two and fifty-seven seconds into the third, they had to have been absolutely stunned to see themselves go up 3-2…and on a shorthanded goal to boot. Matt Hendricks would score his second goal in nine games since being acquired from the Nashville Predators for Devan Dubnyk, as Boyd Gordon sent the rugged winger in on a clear cut breakaway.

Just like Petry’s first period goal, one would have thought Edmonton could have shutdown the worst team in the entire National Hockey League over the final nineteen minutes but let’s not kid ourselves here…we are talking about the 2013-14 edition of the Edmonton Oilers. While they weren’t dominated by the Sabres, they rarely if ever had the puck and proceeded to get outshot 13-5 over the final twenty minutes.

It’s hard to fathom but this team has now gone 4-1 over their last five despite being outshot 206-123. Now by no means are shots on goal the be all and end all of stats but when we are talking about three consecutive games in which they Oilers have given up 59, 41 and 44 shots against, one can’t help but be a little worried.

On a positive note, at least their goalies are finally playing well.
Posted by Oil Drop at 9:38:00 am