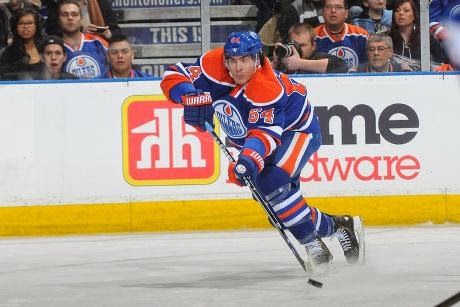 Despite having won four of their last five games, the Edmonton Oilers offence has dried up of late. David Perron led the way with a hat-trick against the Vancouver Canucks and Taylor Hall was in on all three goals against the San Jose Sharks on Ben Scrivens Night but outside of that, it has been rather tough sledding for the Orange and Blue of late.

While they have successfully managed to ride the coattails of their netminders over the last couple of weeks, Monday night’s performance against the lowly Buffalo Sabres was clearly Dallas Eakins’ breaking point. After allowing 100 shots against over their previous two outings, one would’ve thought Edmonton would have come out flying against the lone NHL team below them in the standings but that wasn’t the case.

Instead what we got was an uneven effort from all four lines at even strength, with the top line of Jordan Eberel, Hall and Ryan Nugent-Hopkins being the worst of the bunch. With that being the case, the Oilers bench boss decided the time was right to tweak his top two lines in hopes of re-energizing his offence.

On the surface, many will view the moving of Nail Yakupov onto the first line as a positive but In reality, it will be up to the youngster to finally make the most of an opportunity. While Yakupov has had his fair share of ups and downs when it comes to ice-time and quality of linemate during his sophomore campaign, he has fallen flat on his face whenever a chance to show his stuff has presented itself.

Many are quick to make excuses for the second year NHLer but at some point the player has to deliver. The former first overall pick hasn’t kept up his end of the bargain and in all honesty, has been downright awful for much of the season. He may only be twenty years old and learning his way in the pro game but that doesn’t mean he can continue to do whatever he likes out on that ice…especially when he isn’t producing.

As far as opportunities go, the young Russian sniper couldn’t ask for a better one. Starting with tonight’s game against the New York Rangers, Yakupov will find himself on a line with the Oilers two best forwards… despite still showing an unwillingness to share the puck with his linemates on a regular basis.

With that said, if he doesn’t share the biscuit with his fellow first overall picks, his time on the top unit will be short lived. He needs to simplify his game and let Hall and RNH do the heavy lifting. It is really that simple. If he does that, this line could click. If not, it could get ugly and in a hurry.
Posted by Oil Drop at 10:33:00 am