Eberle, Yakupov or both? 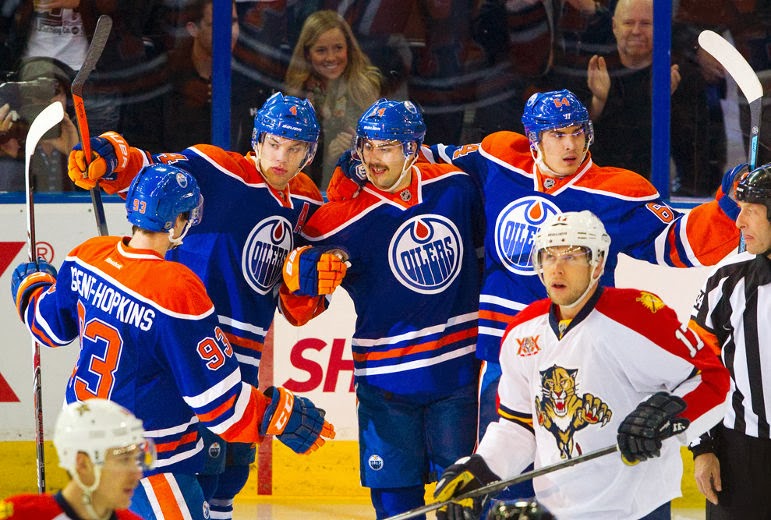 As of this moment, the Edmonton Oilers sit in twenty-ninth place in the NHL standings with forty-two points and just twenty-five games left on their schedule. They trail both the Florida Panthers and Calgary Flames by seven points and look to be a near lock to finish the year with the worst record in the Western Conference but fall just short of the pace being set by the woeful Buffalo Sabres out East.

Even the harshest of Oilers critics didn’t see this season unfolding as it has. There were those who correctly felt this group would struggle mightily under rookie head coach Dallas Eakins but no one thought it would be to this degree. Thankfully, it has been the sort of season which will undoubtedly force general manager Craig MacTavish to take a step back and seriously evaluate what to do next with this roster.

Obviously, there will be more changes coming but perhaps the time has come to look at moving not one but possibly two of his core pieces to try and improve his lineup. When I say core pieces I am not referring to Sam Gagner or Jeff Petry but rather the quartet of Jordan Eberle, Taylor Hall, Ryan Nugent-Hopkins and Nail Yakupov.

Most would agree that both Hall and Nugent-Hopkins are about as close to untouchable as a player in this market could be, with the other three falling well short of that status. That said, the chances of MacT parting with a defenceman as offensively gifted as Schultz seems highly unlikely, leaving the duo of Eberle and Yakupov as possible trade bait.

In the eyes of many, it was always going to come down to one or the other but the way things have played out they could both find their way out of town. It may not be the move the GM wants to make or what most fans want to see happen but in the end, it might just be what is best for this franchise’s long term success.

Now they could certainly look at moving their first round pick at this summer’s Entry Draft but if they truly believe the opportunity to select Aaron Ekblad is there, they would be absolutely foolish to do so. Will Ekblad help in the immediate future? He most certainly will not but walking away from a potential franchise defenceman is something this organization can simply ill afford to do.

No matter how you look at it, MacTavish is going to have to overhaul his roster through free agency and via trade. As we all know, finding a top pairing defenceman during the National Hockey League’s annual “Free Agent Frenzy” is next to impossible.

Outside of the Oilers acquiring Malcolm Subban in a trade with the Boston Bruins and going hard after Montreal Canadiens restricted free agent P.K. Subban with an obscene offer sheet, Edmonton will be forced into making a deal to upgrade their backend.

Same goes for the hole they currently have at centre. Gagner is nowhere near a good enough all around player to be a second line centre on this team and his contract makes him almost impossible to deal for anything of true worth. Be it going out and trying to sign a guy like Paul Stastny or grabbing a Jason Spezza, Sean Couturier or someone else in a deal, that hole must be filled prior to the start of next season.

With Gagner’s trade value being what it is, perhaps the twenty-four old sticks around and slots in on the wing behind Hall and David Perron but still somewhere inside the Oilers top six. Unlike defencemen and centres, there are always an over abundance of available wingers on the open market. Even if MacT were to decide to move all three of Eberle, Gagner and Yakupov, he would likely have next to no trouble finding suitable replacements come next July.

Now would any of those players have the long term upside of an Eberle or Yakupov? Of course not but the potential return in a trade for either one or both of those guys, should see a rather substantial return coming back the other way. Add to that the addition of Ekblad and Darnell Nurse down the road and suddenly this team no longer looks as unbalanced as it once did.

Of course, all this is contingent on Edmonton actually selecting the Barrie Colts star blueliner come draft day. Should that scenario not come to fruition on June 27th, than Craig MacTavish may have little choice but to revert back to his original plan and put his first round pick in play in hopes of getting this rebuild back on track.

This is going to be one busy and very important off season for the Edmonton Oilers general manager, as the time for him to make good on his promise of “bold moves” has arrived.
Posted by Oil Drop at 9:39:00 am