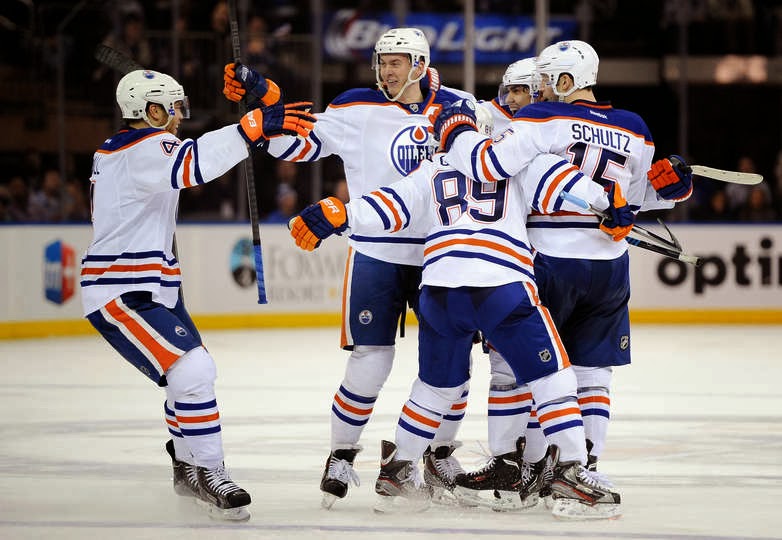 Heading into yesterday’s game between the Edmonton Oilers and New York Rangers, I took it upon myself to call out Nail Yakupov in my Thursday morning column. While the kid has had his fair share of ups in downs during his sophomore campaign, in my mind, it was time for #64 to step up to the plate and deliver.

To his credit, the young Russian sniper proceeded to do just that against the Broadway Blueshirts, leading all skaters with six shots on net and scoring the late-winner to lift the Oilers to a 2-1 victory and their fifth win in six tries. It was another good night for netminder Ben Scrivens, stopping 35 of the 36 pucks fired his way, but for the first time in three starts, his teammates did not leave him to fend for himself for the entire sixty minutes.

It was a performance that was reminiscent of Edmonton’s 4-2 victory over the Vancouver Canucks back on January 27th. On that night, Dallas Eakins’ crew played a very solid road game and received a handful of monster stops from Ilya Bryzgalov that ultimately lead them to victory. That game turned on a pair of late second period pad saves by Bryzgalov off Chris Higgins on a clear cut breakaway.

Fast forward about a week and half later and the Oilers came out with what was easily their finest all around effort since that evening on the West Coast and this time around their fortunes would turn courtesy of a second period stoning of Ryan Callahan on a shorthanded breakaway. Can you say déjà vu?

If that puck goes in, we likely have ourselves a completely different hockey game.

Some people may not want to hear it but when it comes to goaltending, the sheer volume of shots a netminder faces and ultimately stops is not the be all and end all of the position. The difference between a good NHL goalie and an average one will generally come down to the individual’s ability of making that big save when his team needs it most.

Not surprisingly, over these last three weeks Edmonton has managed to put together a 5-4-1 record, despite delivering more than a few stinkers along the way. Outside of their 4-1 loss to the Minnesota Wild, the Oilers have been in each in every one of those games for most of regulation and much of that can be attributed to the play of the man standing in between the pipes

As far as Yakupov goes, the kid not only delivered the game-winner but looked as though he was making a concerted effort to actually change his style of play with his new linemates. If he was going to make the most of playing on a line with Taylor Hall and Ryan Nugent-Hopkins, he had to simplify his game and be willing to share puck. It was always going to be a case of less being more and that was exactly how the former Sarnia Sting standout’s night unfolded.

For the first time in ages, he looked dangerous for much of regulation and wasn’t an absolute train wreck in his own end of the rink. With that being case, his coach decided to use him for one of those rare occasions late in a close game and Yakupov stepped up when it mattered most, thanks to a nifty no-look feed from Sam Gagner and just a wonderful effort from Hall to create a turnover behind the Rangers net.

While the Oilers #4 may have been passed on for the Canadian Olympic Team, the former 2010 first overall pick continues to make huge strides in his overall game. As if out battling two Ranger players to create what would eventually turn into Yakupov’s winner wasn’t enough, Hall’s ability to out muscle Rick Nash behind his own net in the dying seconds was even more impressive.

The ease in which Hall was able to simply take control of the situation and calmly move the puck up ice to an open teammate, was something we have rarely seen from any of the Oilers young forwards and it was nice to see. Frankly, it was a perfect ending to what was a near perfect night in the Big Apple.
Posted by Oil Drop at 1:52:00 am