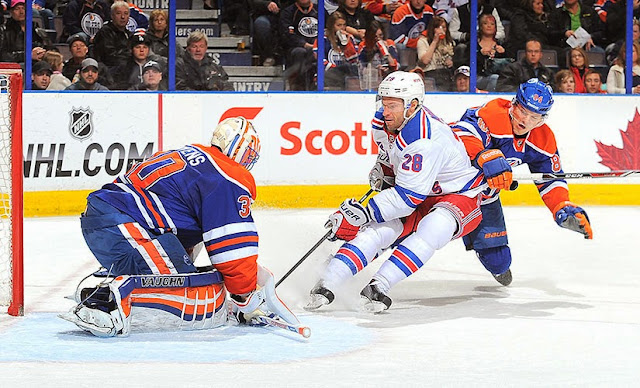 On Friday night the Edmonton Oilers used their fair share of bounces to edge the Anaheim Ducks by a score of 4-3 in overtime. Fast forward forty-eight hours and suddenly the shoe was on the other foot, as the New York Rangers had everything go their way in cruising to an easy 5-0 victory over at Rexall Place.


On night in which the Oilers were shutout for the ninth time this season and for sixth time on home ice, Dallas Eakins’ side had trouble creating even a handful of scoring chances against Rangers backup goalie Cam Talbot. Whereas at the other end of the rink, Ben Scrivens had his typical night since arriving in town, making a handful of highlight reel stops but looking disjointed for much the evening.

In all honesty, the only difference between the twenty-seven year old’s showing against New York and his 48 save performance against Anaheim, was the bounces went the way of the visitors in this one. For every post their Pacific Division rival hit or wide open look they failed to capitalize on during Edmonton’s surprising win, the Rangers made up for it with goals from all over the ice.

While Scrivens struggled with his game from start to finish, the Oilers power play continues to let this team down on an almost nightly basis. Be it coming away empty handed from another six opportunities on the man advantage or the fact they coughed up two more shorthanded goals in the loss, moving their league worst total to thirteen on the season, the ineptness of this once lethal power play has grown to near comical proportions.

While Edmonton came out of the gate with their usual uninspired first period effort, firing all of seven pucks towards the Rangers net and registering just three shots on goal over the opening twenty minutes of action, this was not a game where New York was by far and away the better side.  Even after Derick Brassard made it 2-0 early in the second, this one was far from out of reach. However, that would all change over the next ten or so minutes.

Rick Nash would score twice within a five minute span, the first coming courtesy of just an awful play and read by the Oilers starting netminder, while the other came during yet another breakdown on the man advantage. How this team can continually keep getting caught on one odd man rush after another, at this stage of the season, is simply mind-boggling and yet it continues to happen. It’s as if all five guys seem absolutely perplexed as to where they are supposed to go and what they are to do when they jump over the boards on the power play.

One would think they would have learned their lesson following Nash’s twenty-fifth of the year on a perfectly executed two-on-one break but that would be far too easy for this year’s edition of the Edmonton Oilers.

They proceeded to not only get caught during what was yet another ineffective power play but after Philip Larsen made one hell of a play to break up a two-on-one, both Sam Gagner and Matt Hendricks decided to go after Dereck Stepan with what was frankly an embarrassing half-hearted twirl along the side boards, allowing the Ranger forward to find a wide open Mats Zuccarello for an easy tap in and his second goal on the night.

New York did not do anything special…they simply did not self-destruct like the team wearing Orange and Blue. It was yet another ugly outing in what will surely be one of many over the final two weeks of the 2013-14 National Hockey League campaign.  The countdown is now on and April 12th can’t come soon enough for both the Oilers organization and their long suffering fan base.
Posted by Oil Drop at 4:50:00 pm

Email ThisBlogThis!Share to TwitterShare to FacebookShare to Pinterest
Labels: scrivens