Another loss but the kids keep coming 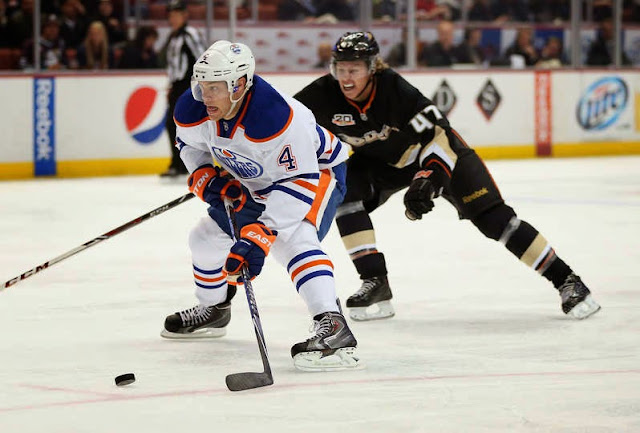 Despite losing their second game in as many nights to one of the premier teams in the Western Conference, the Edmonton Oilers have to be somewhat satisfied with their play over their last couple of outings. While Dallas Eakins’ side did allow third period leads to slip away from them on back-to-back evenings, the fact this lineup was even in either of these games should be viewed as nothing but a minor miracle.

Take a quick a peek at Edmonton’s current roster and please tell me how on earth anyone could be disappointed with a pair of one goal losses, on the road no less, to the San Jose Sharks and Anaheim Ducks. Now does it suck that Francois Beauchemin’s late third period blast somehow found its way through netminder Viktor Fasth with less than ninety seconds to go in regulation? It certainly does but let’s be realistic here.

For the second time in under a week, Anaheim came out of the gate seemingly disinterested in having to put out an actual effort against the conference cellar dwellers. While they woke up from their slumber after twenty minutes at Rexall Place, the Ducks were a no show for the opening forty minutes on Wednesday night. That all changed at the 2:51 mark of period three, as Jordan Eberle put the Oilers up 2-0.

Losing twice inside a week to the second worst team in the National Hockey League likely wasn’t a scenario head coach Bruce Boudreau would have been overly enthusiast with. After being thoroughly outplayed over the first two periods by the Oilers top line of Eberle, Taylor Hall and Ryan Nugent-Hopkins, the duo of Ryan Getzlaf and Corey Perry decided to make an appearance, as Perry scored all of thirty-seven seconds after going down a pair of goals.

From that point on, it was just a matter of time before the Ducks came all the way back. Outside of the RNH line, who combined for 19 of the Oilers 32 shots on goal and quite literally put this team on their collective backs over the last couple of nights, this roster currently has little else going for it. When your next noticeable forward is Philip Larsen, who scored the game’s opening goal to boot, that says all you need to know about Dallas Eakins’ crew.

Both Ben Scrivens and Fasth had their share of ups in downs over the last couple of games and ultimately both fell short of giving their teammates that one stop when they needed it most….be it late in the third or earlier in the game. Their defence continues to be what they usually are, which is a clustered mess. Oscar Klefbom and Justin Schultz had solid showings against the top two teams in the Pacific Division, while the pair of Jeff Petry and Martin Marincin struggled mightily.

We are talking about a blueline that had Mark Fraser play over seventeen minutes against the Anaheim Ducks. Just think about that for a second. So I ask again, how can anyone be disappointed with what we have seen of late? That’s right folks, you can’t be. If anything, the Edmonton Oilers are currently getting the best of both worlds.

They have not only seen their top line rekindle some previous magic since being reunited but have done so without moving ahead of the Florida Panthers in the NHL’s overall standings. At the best of times, this group would be challenged to take points from the vast majority of teams in the Western Conference but with their roster being as battered and bruised as it is currently is, the goal should be to keep from getting embarrassed over these last handful of games…so far, so good.
Posted by Oil Drop at 10:56:00 am