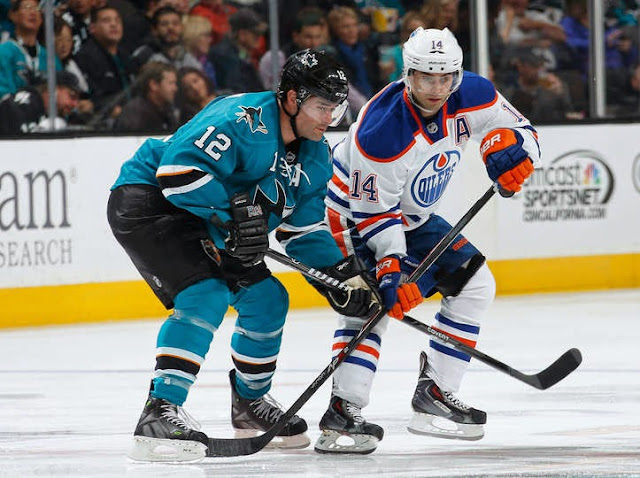 The Edmonton Oilers kicked off their final road drop of the season with the result most expected on Tuesday evening, dropping a 5-4 decision to the San Jose Sharks. While the scoreline may have surprised some, this one was actually close from to start to finish and it had absolutely nothing to do with Ben Scrivens…at least not in a positive manner.

It was a flashback to yesteryear for fans of the Orange and Blue, as the trio of Jordan Eberle, Taylor Hall and Ryan Nugent-Hopkins combined for ten points and looked to be the dominant line they once were. Begging the question, what took so damn long for coach Dallas Eakins to reunite the Oilers big three?

Coming out of the Olympic break, it made perfect sense for Edmonton to keep their top two lines of Hall- RNH-Nail Yakupov and David Perron-Sam Gagner-Eberle intact. The Nugent-Hopkins trio were real good prior to the break but the moment Yakupov hurt his ankle, the plan should have been to go back to a set up that has worked time and time again.

Unfortunately that wasn’t in the cards, as Eakins seemed almost unwilling to reunite the trio for any length of time. Instead, the rookie bench boss continued to feed Gagner gravy minutes with Hall and Perron, who have been by far and away Edmonton’s two most consistent forwards this season. Problem being, it handcuffed Nugent-Hopkins with two defensively challenged forwards in Eberle and Yakupov until the Russian’s most recent injury setback and then saw him play with bottom six forwards like Anton Lander and Tyler Pitlick.

Thankfully that experiment came to an end midway through last Friday’s game against the Anaheim Ducks and despite a rather lacklustre performance from the entire team against the New York Rangers over the weekend, the Nuge line has carried the load over the Oilers last seven and half periods of action…which is exactly what a top line is supposed to do.

While the coaching staff may have wanted to spread their so-called wealth over the first two lines, after watching these kids more than hold their own against Joe Thornton and company over a full sixty minutes, one has to wonder if the line juggling was even worth the hassle.. As of late, it has been nothing more than the Taylor Hall Show, as the former 2010 first overall pick has been the lone forward to carry his weight on a nightly basis.

Now the chances of this team earning even a handful of points from their final six regular season games would appear to be nothing more than slim at best but playing Jordan Eberle, Taylor Hall and Ryan Nugent-Hopkins together should at least give them a puncher’s chance. We have repeatedly heard over the last number of weeks of how the Edmonton Oilers need to build some momentum heading into the off-season and use it as a stepping stone towards next season’s training camp.

The chances of these three kids not being back in Oilers silks in 2014-15 are likely minuscule and unless their general manager can find a top flight centre with size prior to next September, they will be the guys leading the charge upfront. With that being the case, perhaps the time has come to simply leave them together from here on out and just left them improve as a line.
Posted by Oil Drop at 11:04:00 am